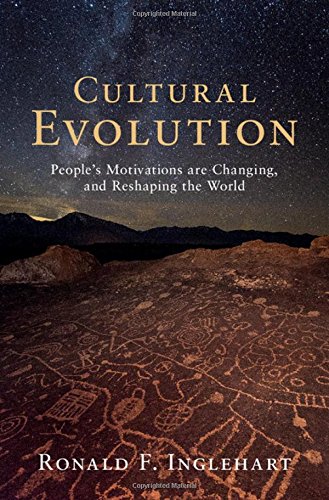 Consolidating more than four decades of research, Ronald F. Inglehart elaborates on the enlightenment story that reliance on science and technology enables nations to meet the material needs of their populations. To that story he adds that populations, finding their security needs being met, are increasingly abandoning materialist values for post-material values. The meaning of life satisfaction is changing.

Inglehart advances this story by converting it into explicit hypotheses and subjecting them to extensive empirical testing. Inglehart marshals considerable evidence chiefly drawing on the World Values and European Values Surveys covering something on the order of 90 percent of the world’s population from 1981 to 2014. Along the way, Inglehart demonstrates the potent role of culture in advancing or retarding the overall trajectory of economic growth and life satisfaction. These shifts occur on a time scale marked in decades through intergenerational change.

Let me point to two, of many instances in which the broad story is given nuance. First, Inglehart shows that as countries become more economically developed, their populations, having increasingly adopted individual autonomy values, are less willing to fight for their countries. For Nordic countries this pattern is less robust than the general pattern, while for the former Axis countries it is more robust. Historical experience shapes the overall pattern. Second, Inglehart identifies two other major departures from the overall pattern of greater economic development leading to greater life satisfaction. Latin American nations show greater responsiveness to material change while former communist nations show less. Here again, historical specificity is shown to modify the general pattern. Inglehart also devotes a chapter to the relatively recent rise of support for authoritarian populist parties. This “authoritarian reflex” he assigns to various developmental induced insecurities. Throughout,  Inglehart  fruitfully engages various challenges that other scholars have raised.

Notwithstanding the bountiful evidence that Inglehart offers, I raise some caution about the inevitability of the trend towards the post-material world. First, the empirical results show a clear pattern of publics becoming less inclined to fight for their countries as they become more advanced in the trajectory of progress. This suggests that the adoption of post-material values generates and increasingly limits governments' ability to engage in war. But governments have adapted by shifting from citizen levies to permanent professional armies and the use of proxies. Moreover, technology provides nations with greatly enhanced lethality that is less reliant on the total numbers of those bearing arms.

Second, the state and corporations have gained control over most aspects of life through surveillance, in general, and of social media, in particular, diminishing self-sufficiency as a viable option. This leaves the post-material public less free to execute a self-generated notion of individual autonomy.

Inglehart concludes with a dual warning. First, he identifies artificial intelligence as likely to generate unanticipated challenges. Second, the familiar partisan divisions based on cleavages largely on division of material benefits are ill-directed to identify and resolve the conflicts that increasingly await. Left unresolved by the evidence presented is whether the values themselves mark the transitions being mapped or whether they constitute a critical causal link.

Inglehart seeks to reach beyond the scholarly audience. To do so, he eschews presenting the daunting array of statistical estimates that are the norm for such analyses. Instead, the extensive evidence is presented through well crafted figures that are self-sufficient in conveying the hypothesis at hand, the array of nations being examined, and the results obtained. Further, he eschews “academes” for clarity. The result is a spare, accessible, masterful, and elegant book.