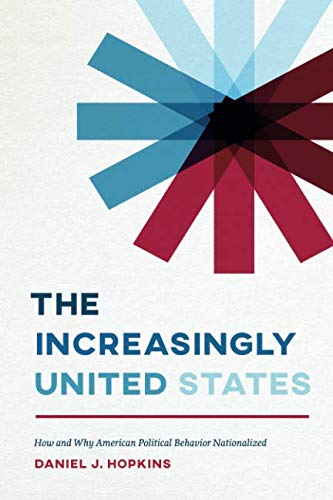 American political behavior has become increasingly nationalized during the past few decades. This is the central argument that Daniel J. Hopkins explores in his new book, The Increasingly United States. In this comprehensive analysis, Hopkins marshals substantial evidence that political behavior at the national and subnational levels has steadily aligned in recent years. Based on the argument and evidence presented in this important book, the adage that “all politics is local” appears to be much less relevant today than it once was in explaining political behavior in the United States.

Hopkins maintains that political behavior has become more nationalized in that voters often apply the same criteria when selecting among candidates across the federal system and they have become less engaged with state or local politics in favor of more national politics. In the course of his discussion, he considers a variety of explanations for increased levels of nationalization that have been advanced by other scholars, including “the centralization of government authority, the decline of Democratic dominance in the South, and the increasing homogeneity of the American economy” (p. 9). Nevertheless, Hopkins fails to find a convincing link between any of these factors and nationalized voting and instead argues that political parties, Americans