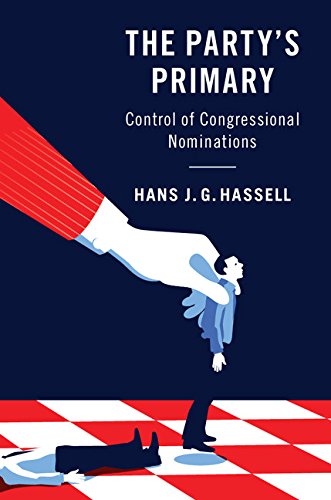 This book takes a fresh look at the role parties play in primary elections, arguing that party leaders help determine who competes in and wins these contests. Prior scholarly accounts hold that parties are hands-off in primaries, withholding endorsements so as not to incite acrimony between party factions. Hassell puts the lie to this account. Drawing theoretically from the UCLA school’s insight that parties consist of broad networks of policy demanders, Hassell shows that these networks are active in both the candidate-entry phase and the electoral phase of primary elections.

Hassell argues that networks of party leaders, donors, and high-ranking activists influence the primary process in several ways. These include collectively identifying a favored (potential) candidate, encouraging that candidate to run, driving other candidates out of the race, and directing electorally important resources to the favored candidate. Put this all together and parties have a significant amount of influence in primary elections.

These party networks have four types of resources at their disposal. Three directly help candidates win election: access to high quality campaign staff; media attention; and money. The fourth is the goodwill of the network, which influences candidates’ future political aspirations. First, party leaders coordinate to identify a fa