The Road to Inequality: How the Federal Highway Program Polarized America and Undermined Cities, Clayton Nall 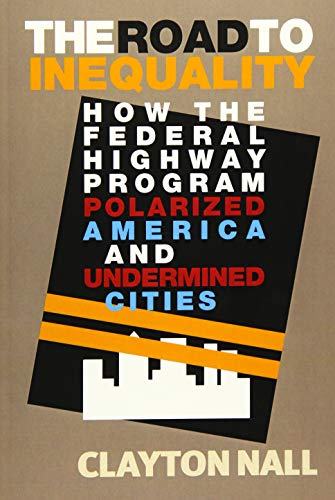 Since 1957, the U.S. federal government has spent over $1 trillion on highways (p. 9). A multitude of well-done urban histories and political analyses have explored the politics behind highway spending and how these highway dollars reshaped urban neighborhoods. Comparatively little attention, however, has been paid to the political effects of these policies. How do highways shape the politics of the places in which they are built, potentially for decades to come?

Political scientist Clayton Nall amasses an impressive array of empirical evidence—including data on highways, public opinion, and voting behavior—to answer this question. He shows that highways facilitated partisan sorting, and that this sorting, in turn, created polarized metropolitan areas, with stark partisan differences between cities and their suburbs. Moreover, he shows that partisanship is increasingly tied to public preferences towards mass transit. Interestingly, Democrats and Republicans largely do not appear to differ on their preferences for spending on roads, underscoring the strong American political coalition that persists in support of highway spending.

Nall also applies his findings to contemporary transit policymaking. In particular, he shows that the devolution of transportation policy has intensified the political import of geographic political polar