Are Politics Local? The Two Dimensions of Party Nationalization around the World, Scott Morgenstern 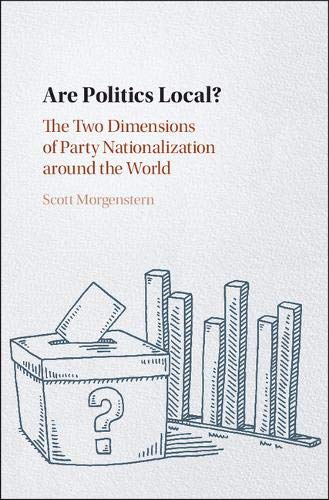 The statement that geography matters for politics probably will not be contested by many political scientists. Therefore, it is quite surprising that few studies have systematically explored how the territorial distribution of preferences affects political processes and policy outcomes. This book by Scott Morgenstern is an important landmark study that puts geography high on the research agenda of comparative political science. Three features make this book worthwhile reading for scholars working on the nationalization of elections and parties.

First, Morgenstern identifies two dimensions of party nationalization and shows that they are theoretically and empirically unrelated. Static nationalization refers to the extent to which party vote shares are homogeneously distributed across districts at a particular point in time. Dynamic nationalization taps into the consistency in the change of a party’s vote shares across time. The combination of these two dimensions leads to a useful fourfold categorization of nationalized, unstable, unbalanced, and locally focused parties. As Morgenstern shows in Chapters 7, 8, and 9, each type of party has different implications for electoral accountability and bill co-sponsorship among legislators.

Second, the focus of the book is on parties and not party systems. Most nationalization scholars explore the extent to which party systems are nationalized, and their indicators for nationalization produce scores that lump parties together into one value. A refreshing insight provided by Morgenstern is that party system scores obscure significant variation across parties within countries. Nationalized, unstable, unbalanced, and locally focused parties can co-exist within a single party system and a party can move between categories across time.

A missed opportunity of the book is the exclusion of subnational electoral data. On the basis of a discussion of Chilean municipal, legislative, and presidential elections, Morgenstern observes that “municipal elections can show strong signs that national politics are more important to voters than local issues or personalities” (p. 100). Despite this interesting finding, party nationalization in subnational elections is not further explored in the book.

Morgenstern’s study focuses on the Americas, which, given his expertise on Latin-American countries, is understandable. But it does raise the question of what explains dynamic and static party nationalization in European countries, most of which have parliamentary systems and many of which have proportional electoral systems with a relatively low number of districts.

The previous two comments reveal that the book Are Politics Local? constitutes a benchmark that will serve as a necessary starting point for scholars who set out to further explore party nationalization.