The Forgotten Americans: An Economic Agenda for a Divided Nation, Isabel Sawhill 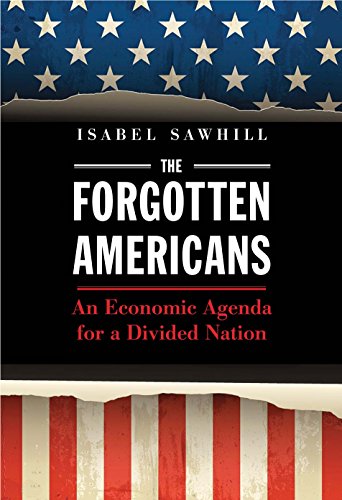 Income inequality in the United States has been increasing rapidly over the last 40 years. This, paired with weak economic growth, means that many Americans have been left behind. In her book, Forgotten Americans: An Economic Agenda for a Divided Nation, Isabel Sawhill proposes a “radical centrist” response of promoting social responsibility, increased vocational and private sector training, and social insurance reform. While inequality is an important issue that needs an immediate response, Sawhill misdiagnoses both the economic and political roots of inequality and proposes a narrow solution that ironically is not radical but parallels much of the policy that created current inequality and Trumpism.

Sawhill argues that the technological change which has benefited skilled workers and an education system that has failed to elevate many into the skilled ranks is the cause of the current rise in inequality. While this explanation is often repeated by economists and politicians, much empirical evidence belies its explanatory powers. For example, the increase in income inequality is hyperconcentrated, with the rise in the income shares of elite subgroups, such as the top 1.0 and 0.1 percent, inside the larger group of skilled workers, driving the rise in inequality. Also, the increase in wage income inequality is an Anglo-Saxon phenomenon; continental Europe and Japan have not experienced the same secular trend. If technological change was driving the increase in inequality, benefits would be more evenly spread across skilled workers, not hyperconcentrated, and all countries at the cusp of the technology frontier, not just Anglo-Saxon countries, would see similar movements in inequality. Finally, there is a growing body of evidence of a large and increasing disconnect between pay and productivity for the top 1.0 percent driven by changes in the rules of the game that increasingly make possible antisocial business strategies such as increasing market power through consolidation or patents, more aggressively confronting labor, and increasing asymmetric information.

Sawhill’s solution of increased vocational training, an earned income tax credit, and more personal responsibility, at best, treats a symptom of increased inequality and some of her plan, such as increased personal responsibility, justify and thus reinforce current inequality by shifting the blame to those losing from inequality. Indeed, in answer to the question of what went wrong, Sawhill puts much of the blame on the poor, suggesting that Americans could move into the middle class if they just waited to have children until they were married and worked full-time. Sawhill fails to realize that she might be reversing causality in terms of children, marriage, and expected economic success and that it is not that people do not want to work, but that jobs are not available—as she documents in another part of her book.

Furthermore, Sawhill’s proposal is narrow targeting the white middle class—and not the rich, poor, or minorities. She dedicates an entire chapter to arguing that we must focus on the forgotten white Americans—even though minorities have seen more negative movements in wages, unemployment, and a number of other economic indicators. Sawhill implores liberals to trim their cultural sails and reduce their attention to bettering the condition of minorities, the LGBTQ community, and women. While Sawhill presents these ideas as politically expedient, they parallel the same calls to move away from helping minorities and the undeserving poor used by Republicans, starting under Richard Nixon and solidified under Ronald Reagan, and then by Democrats such as Bill Clinton, to win the political majorities necessary to enact the economic policies that created current inequality. Indeed, through these policies, many Americans have learned that venting frustration through hate, otherism, and discrimination is legitimate. With an economy that increasingly does not work for many, it is no wonder Trumpism has so much support. Sawhill misses this point, and instead she seems to want to leave the root issues unaddressed, treat some symptoms, and blame the losers—an agenda that is ultimately lacking.