Hydrocarbon Nation: How Energy Security Made Our Nation Great and Climate Security Will Save Us, Thor Hogan 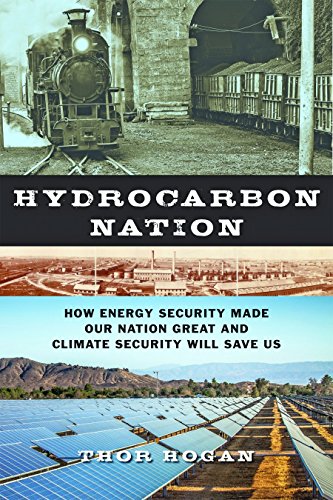 Thor Hogan’s book is incredibly ambitious in its scope but, commendably, accomplishes two related but distinct feats. The first half of the book (Chapters 1–3) provides an extensively detailed, historical account of how the U.S. government used the country’s ample fossil fuel supplies to spur economic growth and provide national and economic security for its citizens. The second half (Chapters 4–6), however, shows how the political, economic, and energy systems built over 200 years both exacerbated a new security threat (climate change) and hindered the U.S. government’s ability to respond to it. More important, it details specific policy proposals to address climate security. Thus, the book both provides a theoretically rich analysis of why addressing climate change is so politically difficult and offers a bold blueprint for overcoming these obstacles. Unlike many other books addressing climate change, Hogan acknowledges the past benefits of fossil fuels and argues that one (gas) can contribute to a sustainability revolution.

Hogan’s framework for historical analysis divides U.S. history into four political “ages” in which major elections realigned political coalitions, which changed the types of policy interventions the federal government pursued. Hogan argues that the increased use of specific hydrocarbons, alo