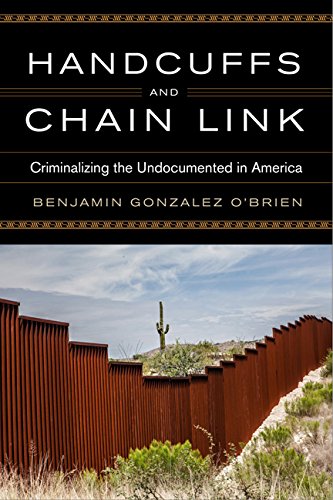 Benjamin Gonzalez O’Brien’s book is a valuable contribution to recent work investigating the criminalization of undocumented immigration. Focusing on the understudied impact of S. 5094 (also known as the Undesirable Aliens Act), a law passed by Congress in 1929 that for the first time criminalized unauthorized entry and was aimed specifically at Mexicans, Gonzalez O’Brien offers a perspective that deepens our understanding of the historical and racist roots of contemporary discourses linking undocumented status to criminality. The author uses the concept of path dependency to analyze how S. 5094 set the terms for subsequent government policy aimed at addressing the issue of undocumented immigration. This early criminalization of unauthorized entry was crucial in framing undocumented immigration as a “law and order” issue the adequate response to which would draw from the punitive tools of criminal justice.

Such a criminal threat frame persisted, Gonzalez O’Brien argues, until a moment of “punctuated equilibrium” developed in the early 1980s that opened space for alternative approaches, culminating in the passage of the Immigration Reform and Control Act of 1986 (IRCA). IRCA and congressional debates leading up to it expanded their focus to include, among other things, employer sanctions, a guest worker program, an