People Must Live by Work: Direct Job Creation in America, from FDR to Reagan, Steven Attewell 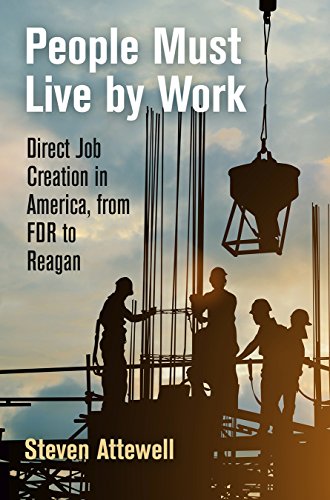 Many contenders for the 2020 Democratic presidential primary have voiced support for a “job guarantee.” There is simultaneously a burgeoning number of think pieces evaluating its merits against a guaranteed income. While Steven Attewell’s excellent history of U.S. jobs programs does not wade into these debates at length, it is a timely volume nonetheless, one that could enrich those discussions while it works to return direct job creation to the center of New Deal policy history.

People Must Live by Work homes in on four pivotal moments. Attewell first examines New Deal–era jobs programs, arguing that their successes have been undervalued, as has their place in U.S. welfare state history. Permanent jobs programs were conceived by some New Dealers as a potential safety net beneath Social Security and other programs, he claims, as a way to place a permanent floor under wages. He also offers evidence to refute (or at least complicate) claims that the Great Depression ended only thanks to World War II, showing that the Works Progress Administration alone reduced unemployment by 50 percent within three years. There is much behind-the-scenes detail here—and in later chapters—revealing the substance of internal administration and congressional debates as well as the inescapable politicking attendant to them.