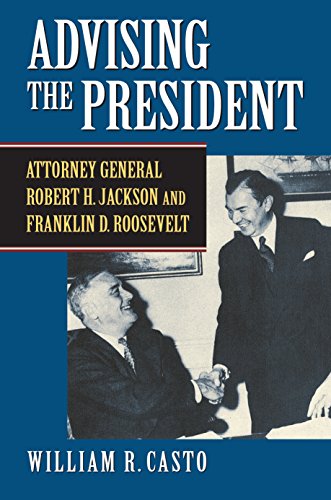 The role of the attorney general is well established within the U.S. federal government. Duties of the position include representing the nation in legal affairs, overseeing the Department of Justice, and acting as a legal adviser to the president of the United States. It is this final function that William R. Casto analyzes in a rich case study depicting the relationship between Attorney General Robert H. Jackson and President Franklin D. Roosevelt.

Succeeding chapters present a series of vignettes illustrating the dynamic nature of the Jackson-Roosevelt relationship. The attorney general supported the president’s desire to independently procure funds for a national airport in Washington, DC, after Congress refused to appropriate funds for the project, but he opposed FDR’s desire to expand the controversial practice of wiretapping. Through these episodes, the point is made clear that advising a president is a complicated endeavor.

The author’s careful attention to historical, legal, and political detail during the Roosevelt period is a central strength of his analy