Drones and Support for the Use of Force, James Igoe Walsh and Marcus Schulzke 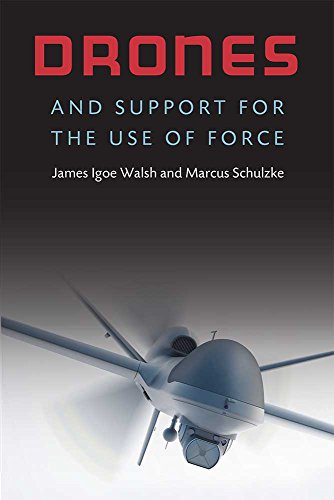 The reasons why armed drones have been embraced by recent American presidents are obvious. They offer pilot invulnerability, protecting military personnel from harm in the conduct of operations and protecting political leaders from the criticism that follows it. They are also exceptionally well designed for selectivity—that is, for distinguishing legitimate targets from innocent civilians and precisely targeting the former without harming the latter.

What may be less obvious is why they have proved anathema to so many critics who are genuinely concerned to make sure that American armed force is used ethically and legally, harming only legitimate targets. After all, both enhanced selectivity and pilot invulnerability reduce unintended harms. Yet many drone critics argue that these weapons pose an exceptional threat precisely because of pilot invulnerability and in some cases target selectivity. Their argument goes like this: democratic leaders and publics are casualty averse, and the fear of public backlash often deters leaders from going to war, but drones remove the danger of military casualties (and potentially diminish collateral civilian casualties) and hence remove the chief sources of public opposition and hence the main deterrents to using force (pp. 32–33). The consequence is that democracies will more frequently resort to force. This will lead to more armed conflict, more harm and a worse world.

One of the central purposes of James Igoe Walsh and Marcus Schulzke’s valuable new book, Drones and Support for the Use of Force, is to test the drone critics’ argument against empirical data on American attitudes to the use of force (p. 8). Using a number of samples and an array of survey instruments exhaustively documented in 40 pages of appendices, the authors show that while the critics’ argument is not wholly without merit, it is often “overstated” (p. 73). While their findings show that “drones do garner more support than other attack types” (p. 25), they also show that “the shift in support is fairly small and is not the only factor that shapes attitudes about violent conflicts” (p. 26). In fact, their survey data suggests that drones are not even significantly or consistently preferred to the use of crewed aircraft, but “are only preferred to the use of ground troops” (pp. 30, 69–70). These findings suggest that “drones are unlikely to cause a radical increase in support for military operations, and that their effects on the incidence of war have to be understood along many other considerations” (p. 26). These considerations whose comparable influence they demonstrate include what the principal policy objective of military action is (that is, foreign policy restraint, internal political change, humanitarian intervention or counterterrorism), the chance of success, the availability of peaceful alternative, and so on (pp. 35, 46, 50).

My only small reservations in enthusiastically recommending this book is a slight inconsistency between the issue that it addresses and the data that it gathers. The issue with which it is centrally concerned is whether the United States will be more prone to initiate military interventions. However, all of the surveys that the authors conduct concern operations in Yemen, Pakistan, and Iraq, which are within the context of the ongoing war with al Qaeda and its affiliates. Whatever attitudes Americans exhibit in this context of ongoing armed struggle may not perfectly reflect their attitudes to initiating new armed conflicts.

None of this, however, is to deny that the book provides important new information and insight that is highly relevant to the question it centrally tackles. On the contrary, this book makes an important contribution not only on whether drones constitute a “moral hazard” but also to the literature on American public attitudes toward the use of force more generally.