The Final Act: The Helsinki Accords and the Transformation of the Cold War, Michael Cotey Morgan 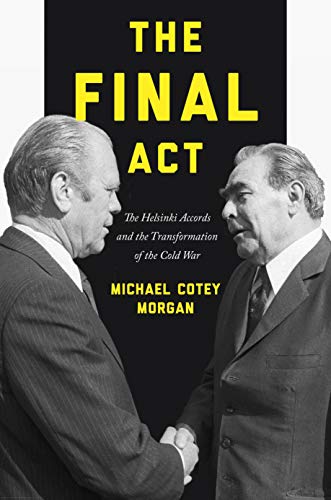 The Helsinki Accords, the sweeping diplomatic agreement signed by 33 European countries along with the United States and Canada in the Finnish capital in the summer of 1975, covered a vast array of issues in international life. It tackled everything from family reunification to advance notification of military exercises, yet the Final Act’s lasting contributions are often summed up in just one issue: human rights. In moving beyond this characterization, Michael Cotey Morgan offers something new and exciting. The Final Act tells a detailed, rich, and engaging history of the Helsinki Accords that makes clear that the human rights provisions enshrined in the agreement were only one of many aspects that ultimately transformed the Cold War.

An international history that tackles the origins, negotiations, and long- term consequences of the Helsinki Accords, The Final Act makes a bold claim. Morgan makes clear that the Helsinki Final Act should be considered the diplomatic successor to the earlier grand diplomatic conferences, including the Treaty of Westphalia, the Congress of Vienna, and the Paris Peace Conference.

Unlike Helsinki’s predecessors, the timing was far from obvious. The Helsinki Final Act tackled issues left outstanding in the wake of World War II, nearly three decades later. On this winding road to the Conferenc