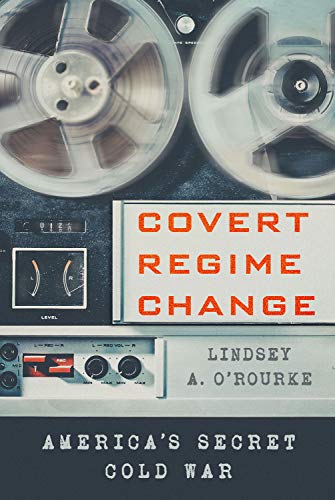 With a few exceptions, international relations scholars have ignored the hidden side of foreign intervention. Data limitations, and a belief that the processes governing overt and covert action are different, help explain this neglect. Lindsey O’Rourke’s Covert Regime Change: America’s Secret Cold War surmounts both challenges, bringing to bear new data and theory to illuminate this phenomenon.

O’Rourke’s book offers a one-stop shop for understanding foreign- imposed regime change. With respect to causes, she argues that the United States intervenes to transform hostile regimes into friendly ones (offensive operations), to prevent friendly regimes from becoming hostile (preventive operations), or to preserve regional dominance (hegemonic operations). Regardless of the goal, regime change is most likely when relations with the target are irredeemably hostile and a viable replacement exists.

O’Rourke also examines why leaders typically choose covert action over public alternatives. She argues that the United States is attracted to secrecy because it is cost-effective and reduces the risk of escalation and reputational harm. Which factors matter most depends on the objective. Whereas escalation concerns are salient during offensive and preventive missions, reputational concerns dominate in h