Presidential Leadership and the Creation of the American Era, Joseph S. Nye, Jr. 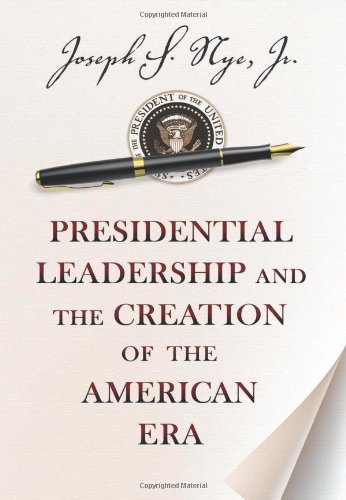 Having elsewhere assessed the structural forces that shaped America’s rise to global power, Joseph Nye now turns to the personal elements. What role, he asks, did individuals, in particular presidents, play in the twentieth‐century emergence of the United States as the arbiter of world affairs? Nye finds wanting the existing literature on presidential leadership as overemphasizing “transformational” presidents and blurring the line between presidential ethics and presidential efficacy.

Nye focuses on eight presidents. Theodore Roosevelt, William Howard Taft, and Woodrow Wilson presided over the early growth of American power; Franklin Roosevelt, Harry Truman, and Dwight Eisenhower consolidated American power; Ronald Reagan and George H.W. Bush completed the conquest of Soviet communism and established the United States as the world’s sole superpower. While conceding the difficulty of his task, Nye attempts to tease out the contribution each president made to the development and maintenance of American power, distinct from the contributions of other individuals and contextual forces. The basic question in each case is: What did this president accomplish that a different individual in the White House at this time would not have accomplished?

Nye gives less credit to Theodore Roosevelt than TR usually gets; in Nye’s view, context and structure explain most of what happened in American foreign policy in the first decade of the twentieth century. Taft didn’t matter much, either. Wilson’s personal impact was large, though, in the short term, in the opposite direction from that which he intended. The reaction against Wilson’s internationalist vision produced the isolationism of the interwar years; only after the failure of isolationism did Wilson’s vision take hold. Franklin Roo­sevelt, Truman, and Eisenhower each made a difference beyond what the structure of forces would have predicted, Nye says. By contrast, most of what Reagan and the first Bush accomplished would have been achieved by almost anyone who was president during the 1980s and early 1990s; the end of the Cold War resulted primarily from developments within the Soviet Union.

Nye’s taxonomy is helpful up to a point. He himself admits the obvious: the model is simply a model, no president fits any of the categories precisely. Even so, many readers will skip some of the categorizing in favor of the insightful capsule summaries of his presidents’ foreign policies.

Nye devotes his longest chapter to the ethics of foreign policy leadership. Here he lays out six categories, crossing ethics and efficacy on one axis, with goals, means, and consequences on the other. He scores each of his eight presidents, with Theodore Roosevelt rating poorly on means (tolerating atrocities in the Philippine war, wresting Panama from Colombia), Franklin Roosevelt favorably on goals and consequences (defeating fascism), and Truman and H.W. Bush best of all (Truman for designing and implementing contain­ment, Bush for completing it).

Nye’s book originated in a course he has taught, and it bears the thoughtprovoking marks of a stimulating advanced class. Readers will have to bring their own knowledge of his presidents if they are to get the most out of his observations; the modest length of the book precludes significant detail.

At the end, Nye extrapolates from the past to offer guidance to presidents in the future. His counsel is unsurprising, the gist being that as the rest of the world catches up with the United States, presidents will be less able to impose America’s will unilaterally. The ability to communicate one’s vision beyond American shores will be an important asset for any president. Like the rest of the book, the advice is measured and sound.