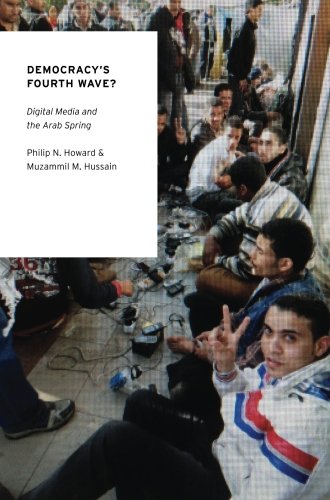 The role of digital media in the Arab Spring is one of the most hotly contested subjects in the study of contemporary social movements and revolutions. On the one hand, journalists and onlookers eagerly cast these conflicts as sudden shifts that represent Twitter or Facebook revolutions. On the other hand, many Western activists and social movement scholars bridle at a starring role for digital media, leading to strident denials. Philip N. Howard and Muzammil M. Hussain’s study implies that both sets of claims are wrong: digital media played a much longer term role in creating favorable conditions for uprisings, helped to publicize key igniting events, and then facilitated those uprisings and their diffusion; but digital media did not do this alone or as suddenly as some observers have claimed.

The story of the Arab Spring, according to Howard and Hussain, began over a decade ago as Internet access and mobile phones began to diffuse rapidly through North Africa and the Middle East. Although Internet adoption rates vary in the region, the most likely adopters are young, educated, urban citizens, and wealthy elites. The authors argue that these individuals are critical audi­ences for rulers, making the flourishing of online civil society in countries such as Egypt, Tunisia, and Bahrain far more t