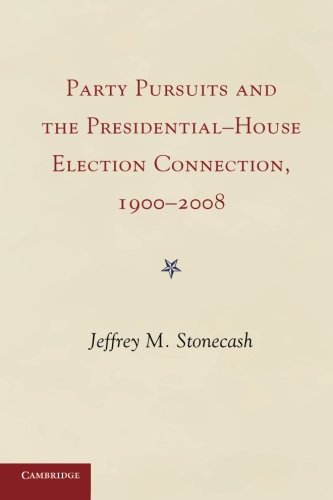 There is an old story of an irate House candidate who complained to a local party leader about going it alone. Why would the party be spending so much time and money helping the presidential candidate and offering no help to him? The party leader answered back, “You see that big barge coming into the harbor? Look behind, in the wake. You see those logs, the junk and garbage being sucked along? This year the president’s the ship and you’re the garbage.”

And then, as charted by Jeffrey Stonecash in his important, provocative new book, Party Pursuits and the Presidential-House Electoral Connection, 1990– 2008, by the 1960s the relationship had begun to fade. The correlation between presidential and House candidates, typically at about .80 for most of the twentieth century, dropped to .10 in 1964 and .25 in 1976. By 1984, nearly one-half of all House districts had split outcomes. Among much else, the ability of the government to respond to voter concerns seemed imperiled, and account­ability judgments became muddled. Divided government became the norm.

Stonecash then levels a robust, convincing assault on the traditional expla­nations for this separation—namely, the growing electoral fortunes of incum­bents. His data suggest that the increase in safe seats,the incumbent advantage, was experienced only by Republicans and that incumbents of both parties have not been able to increase their average vote percentages in the last 60 years. The story of entrenched incumbents and their myriad advantages has been a canard. Next, he charts the reemergence of a House/ presidential connection since the mid-1990s. Rather than a return to the old pattern, however, Stonecash suggests that something much different, much more fundamental has been occurring.

Indeed, one gets the sense that Stonecash uses the House/presidential vote nexus merely as evidence to buttress this argument for a secular realignment. The gap between House and presidential candidates cannot be explained by the incumbent effect, strategic voting, campaign consultants, or declining voter interest in policy questions. Instead, the geographic bases of party coalitions have been shifting for decades, first evident in presidential contests and more recently in down-ballot races. The gap was due to a gradual but steady realignment, with the Democratic base shifting to the north and the GOP base shifting to the south. There was simply a lag in down-ballot races.

By blowing new life into the secular realignment argument, Stonecash takes on some of the sacred cows in the discipline: the incumbent advantage, the stability of individual-level partisanship, ideological sorting, and the growing irrelevance of party organizations. By doing so, the book appears to redeem the American voter. Perhaps we are not so easily swayed by incumbent favors and tricks, and maybe our partisanship can evolve. Could it be that average folks are also polarized? And it might even be true that we actually pay attention to party cues and platforms? Perhaps.

This is an important book, and Stonecash, as always, takes great care to chart the contours of the issue and provide clear, convincing evidence. While not disputing the general thrust of the book, one has to wonder whether his assault on the incumbent advantage literature is a vestige, a straw man. Also, his faith in “parties” to shape and guide public opinion will raise some eyebrows. Toward the end of the book, Stonecash acknowledges that parties are “networks” of allied actors, but scant mention is made of dramatic changes in political communications. Have parties led the way, or are they responding to Fox News, Rush Limbaugh, MSNBC, and countless blogs and tweets? Also, there is a small but growing literature that suggests that some of the changes outlined in the book might spring from, in part, geographic sorting. This might explain how voters could maintain consistent attitudes toward the parties, while the House/presidential election nexus reemerged.

Those are minor issues. In fewer than 200 pages, Stonecash offers one of the most lucid, comprehensive explorations of American party politics in decades. His summary of the literature on parties and elections and his nimble review of party politics in the twentieth century are impressive. He takes big issues head-on and leaves the reader scratching his head, if not thoroughly convinced.