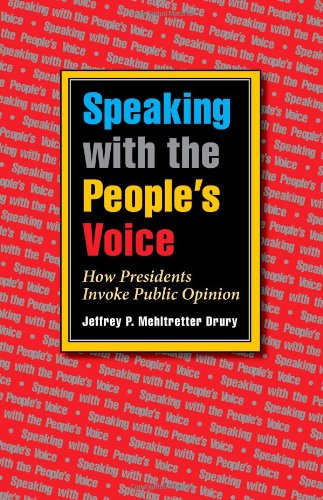 For well over two decades, a cross-disciplinary debate over the proper way of conceptualizing presidential rhetoric and its effects (or lack thereof) has raged sporadically, pitting humanists in communication and English departments against increasingly positivist political scientists. Rather than lurch toward resolution, however, the debate seems increasingly to be conducted across two ever-more distant tracks, as scholars in one camp misunderstand and miscon­strue seminal work in the other and remain largely unaware of new develop­ments outside their own fields. Scholars outside political science touch the bases as they reference work by Jeffrey Tulis, Samuel Kernell, and George Edwards in an often overreliant and myopic manner; political scientists often do the same with hurried references to now-classic works by David Zarefsky and Martin Medhurst but few others.

Jeffrey P. Mehltretter Drury’s Speaking with the People’s Voice: How Pres­idents Invoke Public Opinion is at once an example of a continuation of this trend and a work those who seek to transcend it should read and consider seriously. Drury, a communication scholar and rhetorician, is particularly con­cerned with how modern American presidents have made reference to the preferences and values of t

The Presidency in the Era of 24-Hour News, Jeffrey E. Cohen Reviewed by Justin S. Vaughn