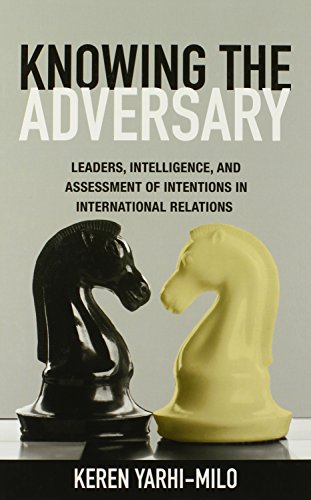 This book examines one of the most important subjects in the study of international security: how leaders tend to assess the long-run intentions of adversaries. Keren Yarhi-Milo develops and tests a novel framework for ex­plaining this process, which she labels the “selective attention thesis.” The argument combines core insights from psychological and organizational the­ories of perception. To Yarhi-Milo, political leaders and members of intelli­gence organizations will tend to privilege very different factors in their efforts to anticipate others’ international objectives.

Yarhi-Milo asserts that political leaders will tend to rely on two types of information in the intention-assessment process: information that is particu­larly vivid (created most prominently from private, face-to-face interactions with other leaders) and information that supports elites’ preconceived notions about the nature of the adversary (the most important preconception is whether leaders possess hardline or more accommodating views of rivals). Members of intelligence communities, in contrast, will tend to pay attention to more objective factors in assessing rivals’ international intentions. To these individuals, organizational context is the key determinant in judging objec­tives. Because the preeminent goal of intelligence agencies is to prevent a surprise attack, the surest way of realizing this organizational objective is to concentrate on adversaries’ military capabilities and what they can do in assessing what they will do.

Yarhi-Milo tests the predictions of her argument against realist and ratio­nalist alternatives by examining thousands of pages of evidence, mostly from internal governmental and private sources, for three key cases: Great Britain’s relations with Nazi Germany in the 1930s, the Jimmy Carter administration’s relations with the Soviet Union during the collapse of détente, and the Ronald Reagan administration’s relations with the Soviet Union at the end of the Cold War. The evidence in all three cases strongly supports the selective attention thesis, and, based on the wealth of primary source documentation, it is difficult to challenge the book’s conclusions. Yarhi-Milo convincingly shows that dif­ferent leaders systematically give varying weights to different factors in assess­ing intentions and that the considerations that matter most to political leaders are not power based, which is a major challenge to realist theories of foreign policy.

Despite the book’s many strengths, there are a few areas that deserve greater attention. Two in particular stand out. First, Yarhi-Milo asserts that while organizational interests are preeminent for members of intelligence commu­nities, for other analysts and leaders, personal “theories, needs, and expect­ations” are determinative (p. 16). Deductively speaking, it is unclear why individual interests should be preeminent for all groups but intelligence analysts or, conversely, why organizational interests trump individual interests only for the latter.

A more important problem is that the book would have benefited from a more systematic analysis of which variables tend to shape leaders’ precon­ceived notions and expectations of adversaries. In other words, are there some variables that consistently tend to make, to use Yarhi-Milo’s categories, leaders hawks or doves toward rival states? To my mind, the most obvious variable that could account for such patterns is the impact of partisan ideologies on the threat formation process. This would explain, for example, why most British conservatives shared Neville Chamberlain’s preferred policies toward Nazi Germany even though most had never met Adolf Hitler (see, for example, Chapter 4 in Mark L. Haas, The Ideological Origins of Great Power Politics, 1789–1989).

Overall, Knowing the Adversary is a great success: it is thoroughly re­searched, well written, convincing in its conclusions, and rich in policy im­plications of the highest security importance.