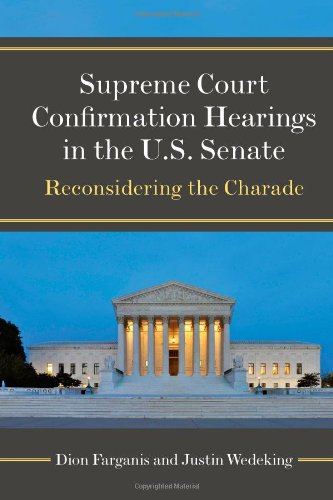 In an era of ubiquitous media coverage of political events, few receive sub­stantially more attention, or receive substantially more criticism, than the confirmation of a nominee to the U.S. Supreme Court. The primary criticisms levied at the process surround the public questioning of Court nominees by members of the Senate Judiciary Committee. Critics allege that rather than serving as frank discussions of pressing legal and political issues, the confir­mation hearings have become ineffectual exhibitions of political theater, devoid of substantively useful information. While some details as to when this changed are disputed, and many explanations as to why this change has occurred are proffered, a broad general consensus has emerged: the Supreme Court confirmation process has changed for the worse.

In Supreme Court Conﬁrmation Hearings in the U.S. Senate: Reconsidering the Charade, Dion Farganis and Justin Wedeking challenge this conven­tional wisdom. To do so, they undertake an analysis of all Supreme Court confirmation hearings from 1955 to today, a period referred to as the “Hearings Era.” Their approach is twofold: first, they systematically assess the quantity and type of questions posed to nominees, differentiating primarily between questions of “facts” and questions of “view.” Second, the authors examine the substance of nominee responses. In doing so, they differentiate primarily between “forthcoming,” “qualified,” and “not forthcoming” answers. In the case of qualified or not forthcoming responses, the authors further categorize the reason for the less than forthcoming response. This coding scheme allows the authors to assess the nearly 11,000 question-response dyads (labeled “exchanges”) that have occurred since 1955.

The results of the primary analysis run counter to conventional wisdom: today’s nominees are, at most, only moderately less forthcoming than those from the beginning of the Hearings Era. The commonly held view that confirmation hearings have become less informative is not supported. The authors then proceed to assess potential explanations for this misinformed conventional wisdom. The authors suggest that the lack of televised proceed­ings prior to the testimony of Sandra Day O’Connor in 1981 allows commen­tators to “remember” earlier hearings as being more forthcoming than they actually were, leading to the claim that today’s hearings are somehow less forthcoming. This technological development has coincided with increased partisanship in Congress generally, and in the Senate Judiciary Committee specifically, which has led to greater criticism of later nominees. The influence of these factors, and their interaction, is borne out by statistical analysis: while a relationship exists between nominee “forthcomingness” and the likelihood of a yes vote from committee members in the pre-television, pre-polarized Senate (1955–1975), no such relationship exists for the televised and polarized com­mittee. In conclusion, the authors assess suggested reforms to the confirma­tion process in light of their findings. According to the authors, the most extreme reform proposals have been based on largely incorrect assumptions about the changes (or lack thereof) in the confirmation process. Instead, the authors suggest a more modest proposal—that Senate Judiciary Committee members continue to hold future nominees to the average level of forthcom­ingness demonstrated by those who came before.

The book makes a substantial contribution to our understanding of the Supreme Court confirmation process. The thorough, exhaustive data collec­tion alone will make this book an invaluable resource for students of the Supreme Court and anyone who is interested in confirmation politics, media coverage of political events, or the impact of congressional hearings. The book is also unquestionably successful in defeating the conventional narrative that the confirmation process was once dramatically more forthcoming than it is today. The authors are explicit about this claim, and they defeat it thoroughly and completely (and occasionally to the point of redundancy). The empirical analysis demonstrating the role of television and partisanship in constructing this false narrative is only somewhat less convincing. The authors interpret the finding of a relationship between nominee forthcomingness and the likelihood of a yes vote in the pre-televised, pre-polarized era as evidence of nominee candor affecting the vote choices of committee members. While this is a sensible inference to draw, it is at least plausible that the causal relationship could run in the other direction: nominees could adjust their level of candor based on their perceptions of the likelihood of success and the belief that their testimony could impact that likelihood. The absence of this relationship in the modern era could then be explained simply by the nominees’ recognition of what the authors posit: that the likelihood of confirmation is largely out of the nominee’s hands once the hearing has begun. Given the importance of this finding for explaining the perception gap highlighted by the authors, some discussion of this possibility is warranted.

Finally, the concluding chapter feels somewhat incomplete. All readers will be convinced that the confirmation hearings have not become a “vapid and hallow charade.” But this, of course, does not foreclose the possibility that they have always been so. The authors seem indirectly skeptical of such a claim, but the chapter begs for a global, not comparative, evaluation of the process. Perhaps this is asking too much—it may be impossible to answer “how forthcoming is forthcoming enough?” Even still, readers will find themselves wanting this question engaged to a greater degree.

These concerns do not fundamentally detract from this important, well-­researched, book. No study of the Supreme Court confirmation process will be complete without engaging the data and the arguments that the authors bring to bear here.