The Classical Liberal Constitution: The Uncertain Quest for Limited Government, Richard A. Epstein 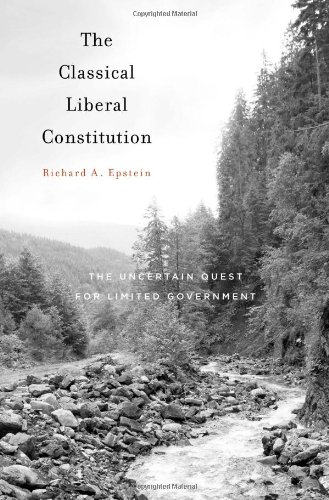 The Classical Liberal Constitution is Richard A. Epstein’s Democracy and Distrust. John Hart Ely’s elegant masterwork offered a defense of many of the Warren Court’s decisions that focused on the vital role courts should play in ensuring a well-functioning political process. Faced with ambiguous and vague constitutional texts, Ely said, judges should interfere with legislative decisions when they find the political process undeserving of trust—both because judges are relatively well suited to police “process” and, crucially, because a well-functioning political process is the idée ﬁxe of our actual Constitution.

If Ely was a progressive iconoclast in search of limiting principles, Epstein is a conservative iconoclast, more learned and less elegant, who has found expansive ones. For Epstein, interpretive disputes should be resolved by resorting to what he identifies as classical liberal theory, a middle ground between order and anarchy that eschews social control, promotes individual rights—and especially property rights—and is deeply suspicious of democratic politics. As Ely did, Epstein defends his guiding political principle not just on normative and institutional grounds but also, crucially, on the premise that the principle is embedded in our actual constitutional ar