On His Own Terms: A Life of Nelson Rockefeller, Richard Norton Smith 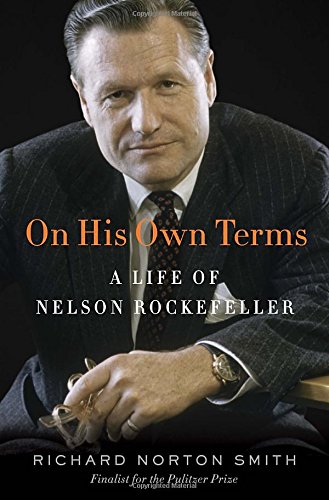 A smart, enthusiastic undergraduate visited to discuss her term paper topic for PLS 301 State Government. I pointed to a 45-year-old campaign picture on the wall and asked, “By the way, who was that guy?”

She had no clue. Even though I was sitting under a banner hanging from my office ceiling, also dating to the 1970 campaign, that read “Governor Rockefeller for Governor.” The larger-than-life governor, who won office in the year I entered high school and was still serving when I joined the SUNY faculty, was in 2015 unidentifiable by a political science major on a campus of the university that was his single greatest achievement. Sic transit gloria mundi.

But maybe not. Not, at least, if your life and works attract the attention of Richard Norton Smith, the accomplished biographer whose capstone volume on Nelson Rockefeller rivetingly captures the essence of the public and private man and his times in New York, the nation, and the world. This work, 14 years in the making, relies on thousands of pages of primary documents, countless interviews, and files compiled by earlier Rockefeller biographer Cary Reich (whose untimely death left his work incomplete), all supplemented by a thorough consideration of published sources.

Born into a world where some saw his forebears as heroes of capitalism and giants of philanthropy, while others viewed them as predatory malefactors of great wealth, Nelson Rockefeller unselfconsciously chose a public life and ran (not walked) through the doors his family name opened. Energy, ambition, and resources notwithstanding, Rockefeller fell short again and again on the national stage. Although he helped bring the United Nations to New York, he did not excel as a diplomat. He never headed a cabinet department. He never won his party’s presidential nomination. He was even denied renomination as vice president, a job he wanted only for what it might lead to if lightning struck.

But as governor of New York, he was transformative. He identified big problems, gathered the “best minds,” and produced grand solutions. An architect manqué with an “edifice complex,” he built grandly, in the capital at Albany and across the state. His first-of-its-kind Council on the Arts brought programs to every corner of New York. He cleaned the Hudson River’s waters. He built roads upstate and intervened to preserve nearly bankrupt mass transit downstate. He abolished the death penalty.

To achieve all this, the governor almost from the first had his way with a state legislature dominated for most of his 15 years in office by his own party. At a time when advocacy of “states’ rights” was still tinged with racism and reaction, Rockefeller led in demonstrating the possibilities of state governments in the federal system.

Perhaps because he was born to such privilege, in both his personal and professional lives, Nelson Rockefeller was impatient with limits. Add to this that when he began as governor, Rockefeller could not know that he would have the job for 15 years. (In fact, he hoped he would not.) The cumulative effect of his sequential bold problem-solving initiatives, devised for credit taking within the frame of four four-year election cycles, was a state heavily burdened by taxes and debt, constantly fiscally challenged over succeeding decades.

Smith tells the truth. He writes engagingly and tough-mindedly, providing much detail, until now unknown, regarding Rockefeller’s tragic handling of the Attica prison uprising and the personally compromising circumstances of his death while making it clear that these are not the essence of the story. This is a very compelling book about a twentieth-century American icon, the likes of whom we are not likely to see pass this way again soon. Read it.

The Third House: Lobbyists and Lobbying in the States, Alan Rosenthal
Reviewed by Gerald Benjamin

Tribune of the People: The Minnesota Legislature and Its Leadership, Royce Hanson, Charles Backstrom and Patrick McCormack
Reviewed by Gerald Benjamin

The Quest for Justice: The Politics of School Finance Reform, Richard Lehne
Reviewed by Gerald Benjamin