Democracy without Justice in Spain: The Politics of Forgetting, Omar G. Encarnación 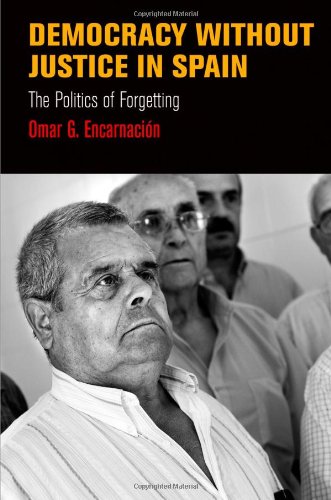 Omar G. Encarnación argues that Spain defied norms concerning transitional justice by sidestepping issues of culpability from its civil war and dictatorship (1939–1975). In the mid-1970s transition to democracy, the left and the right agreed to what amounted to a “pact of forgetting” (el pacto del olvido) in order to focus on democratization, economic development, and Spain’s integration with its European neighbors. Encarnación investigates the details of Spain’s “forgetting” and concludes with a consideration of its implications for larger claims about the importance of transitional justice. His descriptions include discussion of the 1977 amnesty law, the decision to leave intact public celebrations of the civil war victors (such as the Valle de los Caídos monument in which Francisco Franco is buried), and the sanitizing of almost all official references to the war and its aftermath.

In the process, Encarnación reviews a great deal of post-transition political discourse and practice concerning Spain’s modern history. He advances explanations, for example, for why the left accepted the pact (pp. 55–70), although his evidence is throughout more essayistic than methodical. The book considers the Socialist government’s 2007 law of “historical memory,&rd