The Kurdish Spring: A New Map of the Middle East, David L. Phillips 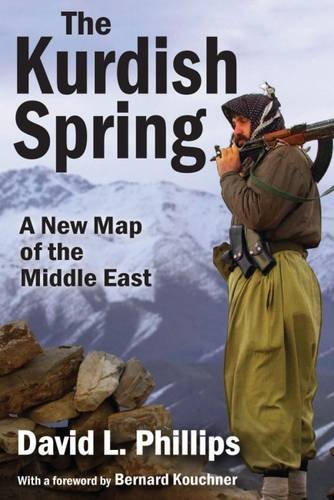 This book is a very mixed bag, with much useful information and insights into the prerequisites of the Kurdistan Regional Government (KRG) of Iraq for independence in its final chapter but also, unfortunately, a great deal of tedious repetition of facts, lack of adequate citations involving the academic literature in favor of less reliable Web sources, and many Web citations lacking dates and consistency in style throughout the text. At times one gets the impression that the author has simply tacked together a series of op-eds that present useful data but are disjointed in their presentation and repetitious when read together as a single book.

However, let us start with the positives regarding the author’s useful insights into possible KRG independence, which was both furthered and hindered by the ISIS (Islamic State of Iraq and Syria) or IS (Islamic State) attacks in the summer of 2014. Wildly successful ISIS advances against the Shia-led government in Baghdad in June 2014 brought the KRG to the cusp of independence by allowing it to suddenly occupy the long-disputed regions around oil-rich Kirkuk as Baghdad withdrew. However, two months later, ISIS also attacked the KRG, driving within 20 miles of its capital at Erbil before being stopped by U.S. air power and renewed peshmerga (KRG military) vigor.

“Islamic State fighters targeted the Kurds for being pro-Western, pro-American, and pro-democracy apostates” (p. 225). As David Phillips then ably sums up, KRG “independence is based on several assumptions. First, the KRG can defend its territory and citizens. Second, the KRG can sell its oil and gas on international markets. Third, revenue from energy sales would be adequate to support KRG operations. Fourth, Turkey is an ally and friend. Events cast serious doubt on [all] these assumptions” (p. 227).

Now for the bad. Phillips is clearly stronger when he deals with the immediate present but weaker in his analysis of the past. As already noted, he practically ignores the enormous amount of new academic scholarship on the Kurds in favor of less reliable clips from the Web, which he frequently fails to date or cite consistently. In discussing the Sykes-Picot Agreement during World War I, Phillips neglects to tell us that the Russians were also a party to it until the Bolshevik revolution. For some reason, he incorrectly adds that “the United States was offered a mandate over the Kurds” (p. 12) after World War I, when actually the mandate was broached for the Armenians, which he does get correct two pages later. He also incorrectly tells us that the term millet “is derived from the Arabic word meaning ‘nation’” (p. 3). However, as is well known, the term originally referred to semiautonomous religious communities in the Ottoman Empire, only taking on the meaning of nation in modern times. Phillips does nicely catch Woodrow Wilson’s sanctimonious self-righteousness when, in discussing his Fourteen Points, he cites another observer that “even the good Lord contented Himself with only Ten Commandments” (p. 8).

The concluding index for some reason alphabetizes people under their first names rather than surnames (for example, Kemal Ataturk or Abdullah Ocalan), or even under such titles as Ambassador Ryan C. Corker, Colonel Abdul Salam, President George Bush (which one?), a totally unconventional practice that makes it almost impossible to locate these people when searching the index. There is no bibliography, and the one map leaves much to be desired in terms of details. Nevertheless, this book offers the reader a quick synopsis of the Kurdish situation in general and some good insights into the requirement of KRG independence in particular.

The Kurdish Question and Turkish-Iranian Relations from World War I to 1998, Robert Olson Reviewed by Michael M. Gunter