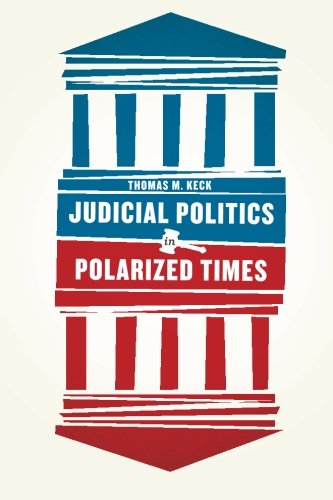 In 2014, the General Social Survey reported that Americans’ confidence in the U.S. Supreme Court had plummeted to the lowest level recorded since the launch of the survey in the early 1970s. One of the reasons why the Court is held in such low esteem is that—as Thomas M. Keck puts it in his terrific book— many Americans think of judges as activist “tyrants,” striking down laws enacted by the people that fail to meet their stringent ideological standards. For their part, judges protest that they are simply impartial “umpires,” doing nothing more than calling “balls and strikes” according to the rule of law. Both of these views are at odds with a prominent scholarly account of the courts that holds that they are relatively weak actors, mere “sideshows” compared with the more powerful executive and legislative branches.

Which of these stories is accurate? Keck sets this question squarely within his sights as he examines four controversial social issues on which courts have played a significant role in our times. Affirmative action and gun rights are explored as examples in which conservatives have successfully turned to courts (to roll back the former and expand the latter). Abortion rights and gay rights are presented as issues on which liberals have increasingly relied on the judiciary (to preserve the former and establish the latter). Keck’s choice of ideologically divergent cases makes his book a welcome standout, as many of the classic studies in this field have limited their focus to liberal court rulings.

The book’s documentation of court activity on these four issues is not just comprehensive; it is exhaustive. Keck examines cases heard by the Supreme Court, federal appellate and district courts, and state courts over a 20-year period. Readers will find that the extensive details provided on each case make the volume a valuable reference in itself.

Keck arrives at a relatively sanguine assessment of judicial review. Yes, on these four issues, judges have struck down a fair number of laws enacted by legislatures or voters. But a thorough examination of public opinion polls shows that many of these laws were not supported by national majorities. In other cases, courts anticipated shifts in public opinion, which gradually came into alignment with their rulings. Thus, on these four issues at least, judges are imperfect agents whose decisions arguably reflect the public’s will no worse than the laws and policies adopted by elected officeholders.

But if courts are neither tyrants nor sideshows, they cannot really be characterized as umpires, either. A convincing analysis shows that the political affiliations of judges have had a strong influence on their rulings, especially in cases of first impression. This leads Keck to argue that rather than fear judicial activism, we should really be concerned about partisan capture—times and places when the judiciary is dominated by one side of the political spectrum and thus is prone to overreach.

Some speculation about whether these patterns hold for other issues would have been welcome. I found myself particularly interested in what these discoveries tell us about controversies regarding religious freedom and the establishment clause. It also would have been good to hear Keck’s thoughts about the varying interplay of courts and federalism on these four issues, as federal courts appear to be curtailing states’ independence on affirmative action, gay rights, and gun rights while granting them more leeway on abortion.

But these are minor quibbles. In its comprehensiveness, its rigorous impartiality, and its careful, nuanced consideration of important normative questions about the role of courts in the contemporary United States, Keck’s book is model scholarship on judicial politics, worthy of the highest praise.