Democracy’s Muse: How Thomas Jefferson Became an FDR Liberal, a Reagan Republican, and a Tea Party Fanatic, All While Being Dead, Andrew Burstein 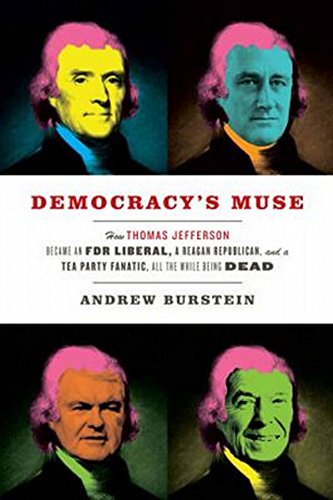 For more than 200 years, Americans have tried to make sense of the present by looking to the past. In Democracy’s Muse, historian Andrew Burstein examines the many versions of Thomas Jefferson that politicians from the Great Depression to the present have used to explain modern American politics and culture. Jefferson is a fitting focus of this study, as, in Burstein’s estimation, “he is the one ‘founding father’ whose political sentiments reverberate loudest” throughout American history (p. ix). Burstein opens with several chapters exploring the myriad ways that Franklin D. Roosevelt, John F. Kennedy, Ronald Reagan, Bill Clinton, and others used Jefferson to support their political agendas. Burstein is less interested in making any particular argument about how Jefferson was used than he is in revealing the “several noticeable facelifts” that Jefferson “passively endured” (p. ix).

Some readers may wish for a stronger analytical framework, but this approach serves two important purposes. By eschewing a specific argument in favor of a more open-ended exploration, readers can better understand both the lens through which presidents asked Americans to view Jefferson and the historical context in which those presidents used Jefferson. The exploratory nature of the first half of Democracy’