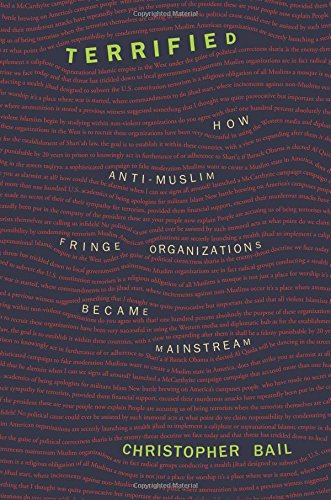 The study of anti-Muslim sentiment in the United States is a burgeoning enterprise, with scholars increasingly devoting attention to the strategies that anti-Muslim individuals and organizations employ to generate anxiety and hostility toward Muslims. The most notable studies to date include the Center for American Progress’s Fear, Inc.: The Roots of the Islamophobia Network in America and Nathan Lean’s The Islamophobia Industry: How the Right Manufactures Fear of Muslims.

Christopher Bail’s new book, Terriﬁed: How Anti-Muslim Fringe Organizations Became Mainstream, is similar to these other studies in terms of the people and organizations it analyzes. Where it differs is its focus on the complex cultural and psychological forces that enabled anti-Muslim organizations to transition from the fringe to the mainstream in the decade after the 11 September 2001 terrorist attacks.