Ideas with Consequences: The Federalist Society and the Conservative Counterrevolution, Amanda Hollis-Brusky 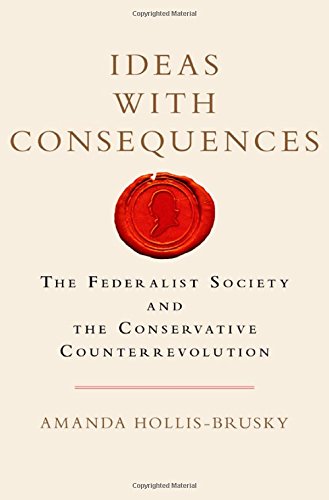 Since its inception at Yale Law School in 1982, the Federalist Society has become the principal hub for conservative and libertarian legal thought in the United States. Despite its presence in academia, the legal profession, and beyond, there has been surprisingly little scholarly examination of its origins and influence.

Ideas with Consequences sets out to change that. Using rich archival research and interviews with legal elites, Amanda Hollis-Brusky sheds needed light on the Federalist Society. Her analysis shows how it not only helped organize the conservative legal movement but also affected the language and direction of key judicial decisions. The result is a convincing argument that the ideas formed in the Federalist Society have had, and continue to have, serious consequences.

Central to this book is the concept of the “political epistemic network” or “PEN.” The Federalist Society is an ideal PEN in that it is, among other things, composed of like-minded professionals with a shared vision of political and social life as well as shared beliefs about how to bring about that vision (p. 13). As a PEN, the Federalist Society has successfully affected the development of legal doctrine across a range of issues, with assistance from “signals” from supportive judges (p. 157).

To guide her study,