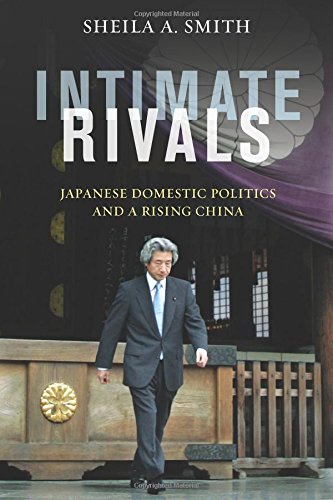 Sheila A. Smith, a senior fellow at the Council on Foreign Relations, has utilized her extensive networks within the Japanese policy community to write a definitive book on how Japan’s contemporary domestic politics affects its China policy, which is also indispensable for understanding East Asian international relations at a critical historical moment.

Policy analysts should find in this book timely and critical analysis of shifting Japanese domestic politics related to a rising China. What separates the book from most policy studies on Japan is the author’s intimate knowledge of Japanese society and the Japanese way of politics. Smith points out, for example, that Japanese think about China’s rise not as an abstract notion of the rise and fall of great powers. Rather, daily experience of specific events and crises related to China has captured Japanese public attention, which is crucial in shaping their views of China and their advocacy for policy response (p. 237). Thus, Smith draws attention to how growing Chinese influence in Japan has affected Japanese domestic politics, which, in turn, had shaped Japan’s China policy. In that context, Smith analyzes issues that are not necessarily high on other specialists’ research agenda, namely, how growing Japanese dependence on Chinese food imports has affected the Japanese sense of food insecurity, heightened by incidents such as poisoned dumplings found in 2008.

Compared with other major powers, Japanese domestic politics and foreign policy used to be more or less predictable. That is no longer the case. While Japanese domestic politics has become more exciting for observers overseas, it is also harder to comprehend. Smith’s book offers an invaluable window into the domestic process of Japanese foreign policy. Some of her arguments are debatable. She points out rightly Japan’s deficiencies in formulating a strategic response to a rising China. But she blames mainly “the degree to which bureaucratic barriers to change got in the way of a strategic policy response” (p. 246). Looking at some of the same incidents and crises that Smith has studied, one may also point the finger at the Japanese politicians as a source of the problem, at least in a transitional period. Tension with Beijing partially arises from a lack of institutional memory and continuity, which weakens trust and complicates relationship management.

For those academics more interested in theories, this book has much to offer. In fact, this is a theoretical book at its core. The larger theoretical question is how an increasingly intimate bilateral relationship affects domestic politics. One can seek to turn that question into a hypothesis by examining a large number of cases using statistics. Smith, on the other hand, adopts a sensible case study method, examining four cases of prime ministerial visits to Yasukuni Shinto Shrine, the tension in the East China Sea, food security, and Senkaku/Diaoyu. She has found variation in Japanese politics between the four cases. Her method is appropriate for her research objective, namely, Japanese domestic politics and Japan’s China policy in a single bilateral relationship. Moreover, it would be difficult for anyone to attempt statistical analysis in this area because we do not have reliable analytical narratives about all these foreign policy cases. Take China’s rise, for example: while much has been written, we have few strong works on how China’s rise affects other countries’ domestic politics. Smith’s book sets a good example for how such work can be done, even though the dynamic and content of domestic politics in another country is necessarily different.