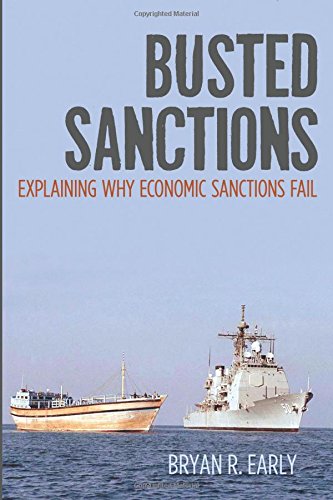 In this book, Bryan R. Early more fully develops one of the key arguments for why economic sanctions fail to achieve full policy success. In contrast to those who argue that sanctions fail because they do not signal resolve, they fail to target a regime’s ruling coalition, or they are primarily designed for domestic political purposes, Early contends that they fail because third parties bust the sanctions. “Sanctions busting” means that third parties increase their trade or aid with the sanctioned state, thereby reducing or even nullifying the effectiveness of U.S. sanctions. Some third parties, allies of the United States in particular, are likely to be trade sanctions busters. Often, however, sanctions take the form of reductions in aid. These sanctions, too, Early contends, are likely to be busted. Trade sanctions are busted by allies of the United States, whereas aid sanctions are busted by America’s adversaries. While others have suggested that sanctions busting occurs, Early gives this view more weight than others and is the first to advance the argument that allies bust trade sanctions while adversaries bust aid sanctions.

In support of his argument, Early offers the most thorough analysis to date of sanctions-busting activity. The analysis employs both multivariate models and qualitative case studies. Using a competing risk model