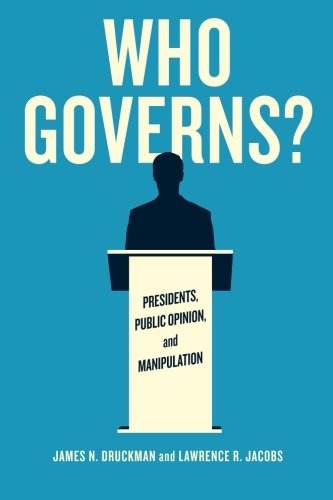 At least since Joe McGinniss’s classic The Selling of the President 1968, political observers have understood that presidents use image-making techniques to get elected and to some extent while governing. Among the many good books written since, Lance Bennett’s News: The Politics of Illusion and Mark Hertsgaard’s On Bended Knee: The Press and the Reagan Presidency are among my favorites.

Given this common knowledge, it is surprising that James N. Druckman and Lawrence Jacobs, in their new book Who Governs? Presidents, Public Opinion, and Manipulation, seem so disillusioned to find, after investigating the use of private polling during the Lyndon B. Johnson, Richard Nixon, and Ronald Reagan administrations, that White House staff track and try to shape what the public thinks about the president’s character, that they pay special attention to particular groups central to their electoral coalitions, and that they strategize to draw attention onto their president’s strengths and away from unpopular policies. Druckman and Jacobs raise the alarm that presidents from both parties exhibit an “unrelenting devotion to self-serving manipulation” in the pursuit of “narrow agendas that they and their supporters favor” and that such behavior “shakes the foundations of classic democratic theories of representation” (pp. 116, xii, 127). Howard Beale, the apocalyptic newscaster in the movie Network, comes to mind.

My own research into White House polling suggests a less dire reality. For example, Druckman and Jacobs chart a sharp and steadily upward rise in the volume of presidential polling from John F. Kennedy to Reagan and they talk about the “enormous and unrivaled capacities” that have been institutionalized in the White House (pp. 25, xiii). However, some presidents who are omitted from the chart and only discussed briefly in the analysis simply did not use polling that much. As I documented in a 2002 article, “Variation in White House Polling Operations: Carter to Clinton,” Reagan and Bill Clinton polled regularly throughout their terms; but, judging by monies spent, such was not the modus operandi of the Jimmy Carter and George H.W. Bush administrations, which both polled relatively little during the first three years of their administrations. And we simply do not have enough information yet about the George W. Bush or Barack Obama administrations.

Likewise, Druckman and Jacobs have a more alarming assessment of Reagan’s use of private polling than I came to after analyzing the same archival material. They demonstrate that the opinions of certain Reagan constituencies (Republicans, independents, Baptists and Catholics, and the affluent) influenced what the president said about issues. From this, they generalize “that presidents publicly claim to serve the nation but their administrations work diligently to cater to segments of the country—the clusters of voters who are most prone to deliver reliable support” especially the affluent (pp. 62, 71). In a 2006 article, “Private Polls and Presidential Policymaking: Reagan as a Facilitator of Change,” I looked instead at what Reagan did. I found that if an issue was highly popular and visible, Reagan acted in line with majority public preferences more than 70 percent of the time.

To their credit, Druckman and Jacobs acknowledge that presidents remain unable to actually change the public’s preferences much. Presidents can only draw the public’s attention toward certain issues, distracting them from others, a technique called “priming.” In other words, the authors find “chronic intent to manipulate” yet concede that presidents’ actual success in doing so is “selective and conditional” (p. 127).

Even if one is skeptical that Druckman and Jacobs possess sufficient evidence to warrant such a harsh characterization of presidents’ motives and the state of U.S. democracy, this is still an important book. They turn a critical eye toward common political practices and highlight how such behavior by our elected officials departs from our idealized understanding about how democracy works.