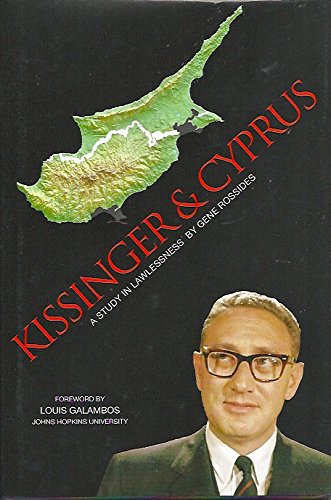 Henry Kissinger, despite his dubious reputation outside the United States, is generally treated in this country as the equivalent of a diplomatic demigod. He is popularly revered as the most brilliant, successful practitioner of Realpolitik to have ever presided over American foreign policy. Yet Kissinger’s diplomacy produced or contributed to a series of disasters in Africa, Latin America, the Middle East, and Southeast Asia whose scope and magnitude was, until the administration of George W. Bush, arguably unprecedented in the history of American foreign policy.

A welcome addition to the critical studies that separate the Kissinger myth from the actual historical record is found in Kissinger & Cyprus: A Study in Lawlessness by Gene Rossides. This volume is of particular interest and value for its careful and thorough deconstruction of a specific case study that offers evidence for an indictment of Kissinger’s broader foreign policy record as national security adviser and later as secretary of state for Presidents Richard Nixon and Gerald Ford, from 1969 to 1977. Indeed, Rossides’s meticulous study underscores the catastrophic effects of Kissinger’s policy for the Republic of Cyprus and, in the process, throws into sharp relief the tactics and norms that explain why Henry Kissinger has been a net loss for America’s st