The Jefferson Rule: How the Founding Fathers Became Infallible and Our Politics Inflexible, David Sehat 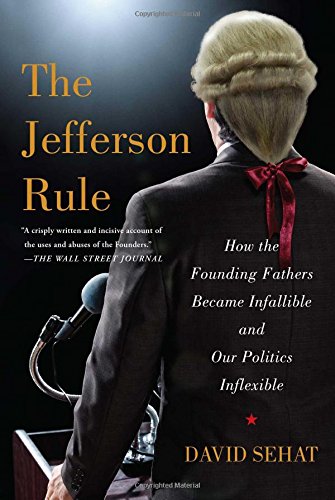 David Sehat has written a breezy book about how politicians since the George Washington administration have invoked the Founders and the Constitution to advance their policies. Sehat claims that Thomas Jefferson was the first to do so, and thus the title of the book—Jefferson established the rule that any policy must be associated with and justified by the Founders. Sehat summarizes his principal findings in these sentences: “Jefferson spoke of the Founders as supporters of an agrarian ideal of liberty. Calhoun made them into promoters of states’ rights. Jackson used them to push political democracy. Others have gone in different directions, using the Founders for national economic development (Clay and Webster), slavery’s restriction (Lincoln), popular sovereignty (Douglas), business rights (American Liberty League), economic equality (Roosevelt), black civil rights (King), tax cuts and antigovernment retrenchment (Reagan), political moderation (Obama), and the revolutionary power of the people (the Tea Party)” (p. 242).

John Adams's Republic: The One, the Few, and the Many, Richard Alan Ryerson Reviewed by Ralph A. Rossum