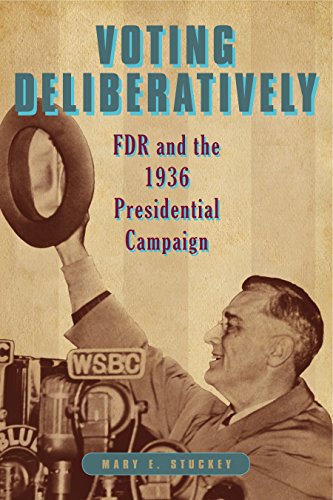 Students of public opinion are familiar with the story of the 1936 election. It was the moment when the opinion poll, using sampling designs based in scientific principles, forever supplanted other methods of gauging public sentiment. The truth and mythology emerging from 1936, however, including the rise of George Gallup, Elmo Roper, and others, have often eclipsed the significance of the election itself.

In Voting Deliberatively, Mary E. Stuckey brings important perspective to the first reelection campaign of Franklin D. Roosevelt and persuasively argues for 1936 as the point at which the nation transitioned from the electoral politics born of Martin Van Buren’s genius to the modern campaigns of today. With the benefit of hindsight, Stuckey makes a credible case for 1936 as the beginning of the move from personal, local, party-based politics to aggregate, national, candidate-centric politics. Stuckey illustrates this transition through discussion of four characteristics of Roosevelt’s campaign and, in several instances, the personalities central to the transition. These characteristics are the emergence of scientific polling to gauge public opinion, the growth of candidate-centered politics, reliance on group-based coalitions outside of partisan organizations, and cementing the president as the lens through which citizens view government.