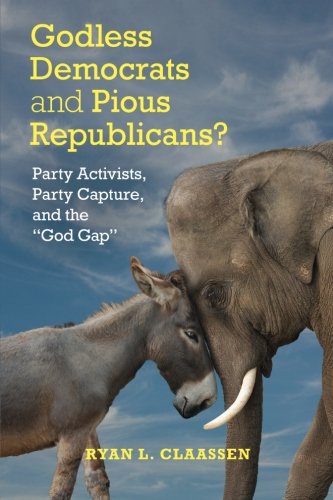 Since the 1960s, the Republican Party has increasingly become the party of religious traditionalists and evangelical Christians, while the Democratic Party has become the home of religious liberals/modernists and secular Americans. This rising partisan “God gap” has led scholars and pundits to pay close attention to religion in modern politics, but the true causes and consequences of the religious divide are still debated.

The prevailing scholarly wisdom is that American political parties have been
“captured” by religious and secular activists. Specifically, this “mobilization” thesis argues that the Christian right hijacked the Republican Party by mobilizing evangelical activists against liberal policies during the 1960s and 1970s. Secular activists—the story goes—captured the Democratic Party as a result of the backlash over the Republican Party being taken over by conservative Christians.

While mobilization has certainly occurred, Ryan Claassen advances a new “representation-based” model to explain the changing role of religion in party politics. The story that Claassen tells is remarkably—and perhaps dishearteningly—simple: evangelicals and secular Americans are more influential in party politics today in large part because there are comparatively more of them today t