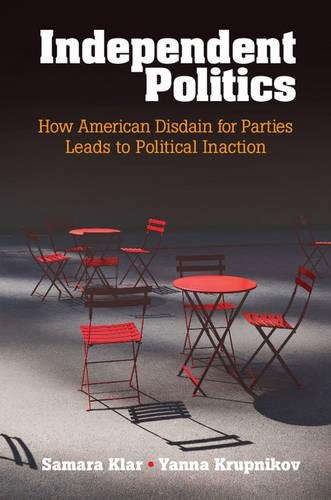 Samara Klar and Yanna Krupnikov offer a fresh new contribution to the American politics literature on independent voters. Their new book, Independent Politics, presents carefully considered evidence on how nominally independent voters participate—or refuse to participate—in politics. Klar and Krupnikov’s core insight is that Americans shy away from partisanship because it is perceived as socially undesirable, posing serious costs to a vibrant democracy. From the watercooler to the voting booth, “people refuse to engage in consequential political actions simply because these actions could make them appear partisan” (p. 3).

Using experiments and survey data, the authors show that even partisans
prefer independents to fellow partisans. Americans rate independent voters as better neighbors and coworkers, as well as more physically attractive. As politics has become more polarized and parties have been embarrassed by public scandals, more people have hidden their partisan identities. The more experimental subjects are exposed to the discord of polarized politics, the more social stigma they attach to partisanship. “High self-monitors,” who are more vigilant of their self-image, are the most likely to call themselves independent and avoid communication that might convey the impression of partisanship. They do not wear stickers, post signs, or, most importantly, talk to their friends about political parties.

Throughout the book, the authors are careful to control for competing explanations. For example, Americans are not turning away from political parties because they are becoming apolitical, malleable, independent, or sympathetic to third parties. Instead, they have just gone undercover with their standard partisan beliefs. In one experiment describing various scenarios of partisan compromise and the refusal to compromise, high-self-monitoring independents reward fighting and punish compromise whenever it is coming from their own side. In failing to support parties, undercover partisans have given up the political participation that makes partisans valuable without adopting independents’ supposedly valuable propensity to compromise.

It is hard to find fault with their analysis of why Americans avoid partisan labels. But readers might not follow the prescription that follows their diag- nosis. Deliberative democrats might question the benefits of more overt partisanship. Diana Mutz’s Hearing the Other Side: Deliberative versus Participatory Democracy argues that there is a trade-off between thoughtful deliberation and political activism. The voters most likely to be partisan activists are the least likely to weigh trade-offs or consider opposing views because qualified support undermines passionate activism. Where Klar and Krupnikov want to encourage nominal independents to openly embrace their inner partisan, deliberative democrats might encourage nominal independents to act like true independents, weighing trade-offs and crossing party lines when appropriate. The authors follow a line of political scientists who view party affiliation mostly as a product of social identity and issue positions as post hoc rationalizations. Turning party affiliates into activists rather than deliberative citizens treats the trade-off between deliberation and activism as unproblematic.

Additionally, party activism is just one way of working toward a better polity. The negative consequences of covert partisanship might be counteracted if voters switched from parties to civic- and issue-based political groups. Finally, the authors’ own figures (p. 148) show that 20 percent of voters are true moderates and 40 percent are liberal on some issues but conservative on others. With 60 percent opposed to both American party ideologies, it would be puzzling if critics did not push back against political parties.

Maybe the authors think that public professions of faith in our two parties, representing underlying social identities, are the best that democracy can realistically accomplish. In any case, the authors have made an essential contribution to the field by explaining what the motivations and behavior of covertly partisan independents.