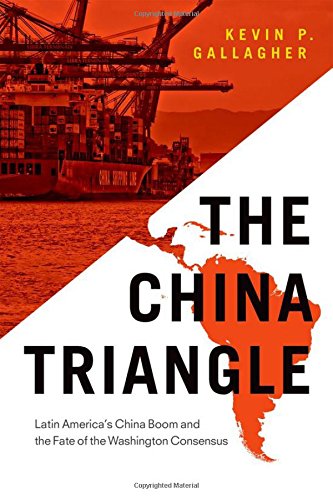 Kevin Gallagher’s latest book is a welcome contribution to the substantial and growing literature on Chinese engagement with Latin America. The present work, in some ways, extends and updates his pioneering 2010 book, Dragon in the Room, coauthored with Roberto Porzecanski. As with its predecessor, The China Triangle is both readable and filled with solid analysis. This is not your typical book by a PhD trade expert; the workbook integrates personal observations and illustrations with graphs and econometric analysis, and even once manages to use the word “hoopla” (p. 43).

The China Triangle examines how, particularly from 2003 through 2013, select countries in Latin America benefited from their expanded trade relationship with the People’s Republic of China (PRC) as well as investment from PRC-based companies and loans from Chinese banks. While Gallagher acknowledges that revenues from commodity exports to the PRC contributed to programs to reduce poverty in Latin America, he finds that the region’s governments largely failed to effectively leverage this bonanza, in combination with coherent state policies, to diversify their economies and move them toward higher value-added production. Rather, he argues that competition from Chinese imports, together with the appreciation of Latin American currencies as a result of commodity exports, contributed to the deindustrialization of the region.

In The China Triangle, Gallagher also presents key findings from his ongoing analysis of Chinese loans and credit swap arrangements in Latin America. He also notes how such loans generally support PRC access to the region’s raw materials and foodstuffs. In observing that such loans fund “infrastructure” in both Latin America and Africa, he does not mention that in contrast to projects in Africa, virtually none of China’s proposed transportation infrastructure projects in Latin America have gone forward. Rather, the vast majority of loans have supported electricity generation, petroleum and mining capacity, facility construction, and, in Venezuela, consumer goods purchases.

Gallagher’s work further provides useful illustrations of Chinese companies’ establishment of operations in Latin America, which has taken off since 2010 in a range of sectors including petroleum, mining, manufacturing, telecommunications, and agriculture. His discussion of agriculture, however, surprisingly overlooks the failure of Chinese companies such as Chongqing Grain and Sanhe Hopefull to establish logistics complexes in the region in competition with powerful agro-industrial conglomerates such as ADM, Bunge, Dreyfus, and Cargill.

If this excellent work has a serious flaw, it is its misleading title. The “triangle” refers to the interdependence of interactions between China, the United States, and Latin America. Yet the United States is not discussed until the second half of the last chapter, principally focusing on how it can help the region by being more of a “partner” than a “patron.” The impact of the PRC–Latin America relationship on U.S. trade with the region and U.S. pursuit of its policy goals there is only briefly mentioned. The impact of the United States on how the Chinese government manages its relationships with the region is not discussed, nor is the impact of China’s presence on the strategic position of the U.S. globally. Nor does Gallagher reflect on whether Latin America, with its political, economic, and geographic diversity, can be represented as a single node in a triangle. Yet the problem is more with the title than with the work. Gallagher has hit another home run. But be advised, if the reader is looking to understand the “triangular” relationship with the United States, this is not that book.