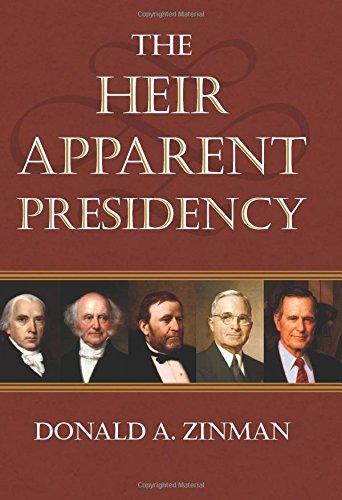 In this fine new volume, Donald A. Zinman examines the presidencies of those who immediately followed regime-building presidents. Zinman’s project, in the tradition of American political development, is to delve into one of the cyclical aspects of Stephen Skowronek’s notion of political time (The Politics Presidents Make: Leadership from John Adams to Bill Clinton) and articulate a difference within a broader category.

Skowronek’s reconstructive presidents establish enduring regimes; articulating presidents are those that follow and uphold that tradition. From within the articulating presidents who maintain the regime, Zinman identifies a difference, that of the heir apparent. Heirs apparent, in Zinman’s classification, are the five presidents who immediately followed regime builders. He includes in this number James Madison, Martin Van Buren, Ulysses S. Grant, Harry S. Truman, and George H.W. Bush. Grant is included in this group even though Andrew Johnson immediately followed Lincoln because Zinman sees Grant as the more natural heir to Lincoln due to several unique aspects of Johnson’s presidency.

With an engaging style, Zinman uses well-known episodes in each presidency to arrive at commonalities that he argues sets heirs apart from other regime-maintaining presidents who are less immediate to the regime&rsq