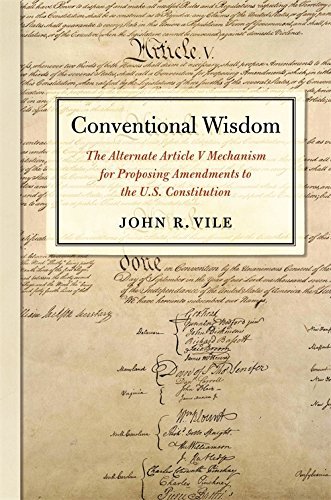 Although all 27 amendments to the U.S. Constitution were first approved by Congress and then ratified by the states, Article V of the Constitution also allows for “a convention for proposing amendments.” The convention mechanism has never been used, but frustration with the difficulty of getting amendments through Congress has pushed constitutional reformers to seriously consider this mode of amendment. That there is no precedent for an Article V convention, however, raises questions about the constitutionality and practicality of using conventions to effect limited constitutional change. In Conventional Wisdom, John R. Vile sets out to address these questions, and the result is a valuable work of scholarship of interest to constitutional scholars and political practitioners alike.

Vile confronts the two biggest objections to using Article V conventions to amend the Constitution. First, many argue that Article V does not permit Congress or the states to limit the amendments proposed in an Article V convention, which suggests that the convention mechanism is appropriate only for considering wholesale changes to the Constitution. But Vile adduces evidence showing that many Framers, most notably, Alexander Hamilton in The Federalist, No. 85, understood Article V as allowing for limited conventions. Vile also explains how it came to be