The Future of Financial Regulation: Who Should Pay for the Failure of American and European Banks?, Johan A. Lybeck 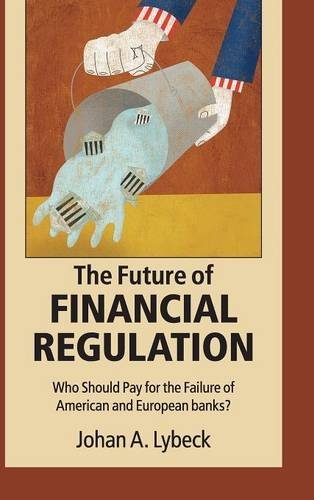 Johan Lybeck’s The Future of Financial Regulation is a superb resource for political scientists studying the financial crisis and its varied regulatory responses, even for those who might not agree with the conclusions reached. The book’s controversial argument concerns the ability of governments to effectively manage banking crises. While there has been considerable public consternation over taxpayer-funded government bailouts of banks, this book argues a case for them.

The oft-proclaimed commitment by countless government officials that taxpayers’ money will not be involved in future bank resolutions is, in Lybeck’s view, neither credible nor desirable. Given the poor historical performance of other options, legislators should focus on the question of how taxpayer-funded bailouts should actually work. For example, the process of injecting public funds to help resolve a failing bank should be made more coherent and streamlined instead of dealing with the fragmented cluster of organizations and procedures existing in the current regulatory landscape.

The book pursues this argument by virtue of a truly impressive collection of 16 case studies of government intervention in the banking sector, focusing on the United States and Europe. In each of these cases, Lybeck “grades” each government intervention from A to F, as in a report card. For example, the Bear Stearns bailout is given an A grade, while the decision to let Lehman brothers go (which, Lybeck points out, was not a simple one) is given an F grade.

The case study material is impressively more detailed than most accounts usually offered and includes descriptions of historical events, down to very specific transactions and individual decision points. Given the central policy argument, the book surprisingly does not engage in a systematic comparative analysis of these cases, examining the different conditions underlying the “grades” offered to each bank resolution attempt. In this sense, there is an expectation of the case studies speaking for themselves rather than having that material summarized or compared in a way that forcefully supports the conclusions reached. Like a lot of intelligent policy critiques, both the public statements of government officials and the details of regulatory policies themselves are taken as sincere yet naive positions, which are then thoroughly critiqued in light of the evidence and deeper analysis. In this book, that means criticizing the “no bailout” statements of politicians and such corresponding clauses in new regulations. One wonders, however, whether such moves by policymakers are themselves fully sincere and therefore foolish, or rather simply reflect strategic behavior vis-à-vis constant negotiation with the industry and the public at large.

Political scientists working in this area will find great value in the incredibly rich within-case analysis yet might find limiting the fact that events are portrayed as a succession of historical facts assembled as either intelligent decisions or policy blunders, with less emphasis on social processes representing instances of larger phenomena. Given the book’s “micro” perspective on individual banks and events, it departs significantly from recent work on the political economy of finance that situates events of the financial crisis and its aftermath within larger causal structures, for example, in transformations within capitalist development such as financialization, and only offers passing observation relevant on other structures such as revolving doors or elite networks. Yet this is a book focused on a prescriptive policy critique, and it is not ultimately aimed to intervene in other larger, related research programs. Nevertheless, the many power struggles between government agencies and large banks in these cases represent an important contribution to the broader research community working on these themes.