Reviewed by Eric A. Heinze 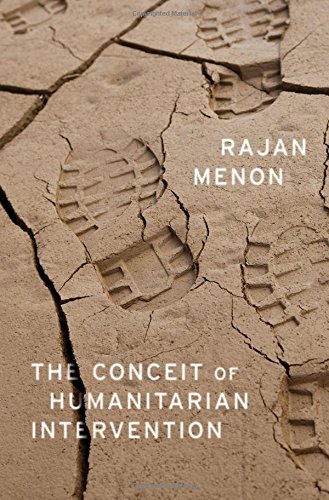 There are few subjects that have received as much attention as humanitarian intervention in the study of international relations since the end of the Cold War. While military campaigns aimed at halting mass atrocities abroad have their share of supporters and critics in both the policy and scholarly communities, Rajan Menon’s book, The Conceit of Humanitarian Intervention, is a particularly critical analysis of this controversial subject. Menon’s argument is that the moral fervor that animates supporters of humanitarian intervention leads them toward an unwarranted confidence in the rightness of their cause that not only results in paradoxical outcomes but also entails a good bit of hypocrisy, historical amnesia, and even bad faith.

For Menon, the moral consensus on which these policies of humanitarian intervention are based is extremely weak, and so, then, is the alleged commitment to take action to end such atrocities. The episodic practice of humanitarian intervention thus vindicates the realist view of world politics, in which the decisive factor driving state policy is promoting national interests, not upholding universal moral principles. As a result, Menon argues, efforts to try to forge such a consensus and articulate criteria for responding to mass atrocities—such as the Responsibility to Protect (R2P) principle—are unl

Purify and Destroy: The Political Uses of Massacre and Genocide, Jacques Semelin Reviewed by ERIC A. HEINZE

The Rhetoric of Genocide in U.S. Foreign Policy: Rwanda and Darfur Compared, ERIC A. HEINZE