The Rise and Fall of the Voting Rights Act, Justin J. Wert, Charles S. Bullock I I I and Ronald Keith Gaddie 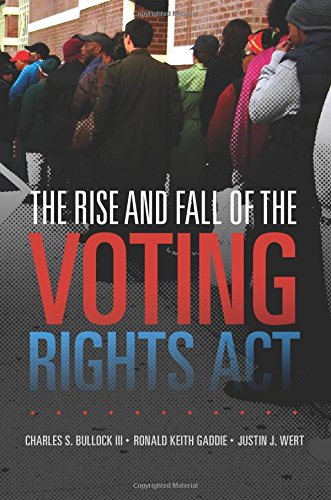 The preclearance requirement, the strongest weapon in the Voting Rights Act (VRA), was rendered useless by Shelby County v. Holder in 2013. The U.S. Supreme Court determined that Section 4, which provides the formula for deciding which states are covered by Section 5, was no longer constitutional. This book explains how the Voting Rights Act became vulnerable to attack and explores possibilities for restoring the preclearance regime or other new voting rights legislation.

As in their earlier book, The Triumph of Voting Rights in the South (2016), authors Charles S. Bullock III and Ronald Keith Gaddie, this time joined by Justin J. Wert, argue that the Voting Rights Act has been extremely successful. Using primarily U.S. Census Bureau data from 2012, they show the progress made by covered states since 1965—increased voter registration and turnout among African Americans and steady increases in the numbers of black elected officials in covered states, especially in those that have been covered the longest.

Is the picture rosy because Barack Obama was on the ballot in 2012? The authors compare 2004 and 2008 turnout; although Obama clearly drew black voters to the polls, the gap between black and white voters had already narrowed considerably by 2004. However, it is disturbing that the large states of Florida and Texas had racial