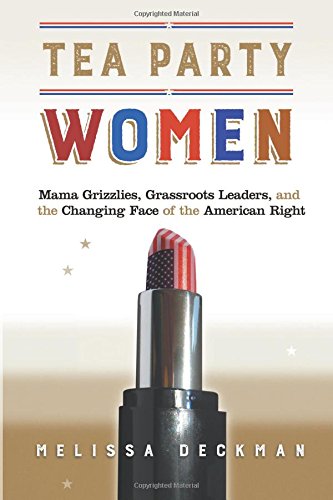 Scholarship on the Tea Party remains prevalent following the 2016 presidential election, but recent work comes with considerable overlap. Melissa Deckman offers a much-needed departure from exiting literature by arguing that women hold a uniquely new position within the Tea Party. However, her analysis falls short of fully interrogating why the mostly white, educated, middle-class women of the Tea Party find the movement’s call to “take their country back” so captivating.

According to Deckman, the Tea Party is a vehicle for conservative women to enter politics amid traditional Republican Party gender barriers. Personal interviews illuminate several Tea Party women who have become activists and grassroots leaders, such as Jenny Beth Martin, who organized the first Tea Party rally under the “Tea Party Patriots” banner. The personal accounts of “Mama Grizzlies” are a new and intriguing contribution, and the variety of women taking leadership roles is an important and overlooked element of the Tea Party. Furthermore, Deckman claims that the active role of women in the Tea Party has a chance to shape our “perception of what constitutes women’s politics,” especially if the movement is able to expand it’s appeal beyond a “relatively small number of conservative women” (p. 29). Conversely, he