The Other Rights Revolution: Conservative Lawyers and the Remaking of American Government, Jefferson Decker 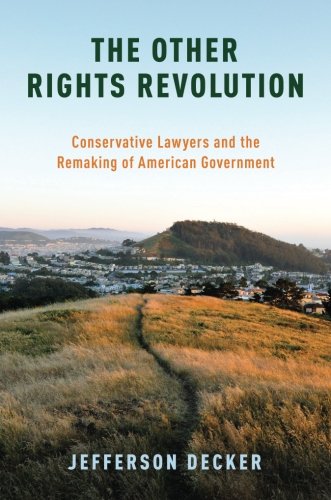 Scholars have long documented how, in the 1950s and 1960s, advocates for several liberal interest groups found some success in pursuing their causes in the courts. The NAACP created its Legal Defense Fund, which supported litigation that began chipping away at institutionalized racial segregation. Similarly, some consumer, environmental, and women's rights organizations also pursued litigation strategies. This “rights revolution,” which Charles Epp refers to in his 1998 book of that title, helped trigger what Jefferson Decker calls “the other rights revolution.” In his book of that title, he analyzes the roles that conservative lawyers, and the public interest legal organizations they founded, played in the 1970s and 1980s.

The main body of the book examines the founding and development of the Pacific Legal Foundation in 1973 and then the Mountain States Legal Foundation, the Great Plains Legal Foundation, and the Washington Legal Foundation in later years. The Pacific Legal Foundation, led by Ronald Zumbrun, a former aide to Ronald Reagan when he was governor of California, began by filing amicus curiae briefs in support of restrictive welfare laws in cases brought by welfare rights organizations. The original focus on welfare policy was short-lived, and Pacific shifted its focus to defending the property rights of property owners in challenges made against land-use regulations that were supported by environmentalists. Further, Pacific's litigation strategy shifted from filing amicus briefs in cases brought by others to providing direct legal support to the litigants challenging the regulations.

The Federalist Society, in contrast to these organizations, was founded in 1982 at a number of elite law schools, and the organization has focused more on academic conferences and networking and less on sponsoring litigation.

Along with press accounts and published scholarship, the author relies on his extensive research in numerous archival sources, including the Mountain States Legal Foundation, the papers of Congressman Wayne Aspinall, and the papers of several other key figures. While Pacific and Mountain States took somewhat different approaches in their respective property rights cases, Decker uses archival sources to confirm the cordial and collaborative relationship between these organizations.

The 1980 election of Ronald Reagan partly caused leadership challenges for Mountain States, as some leaders took positions in the new administration. James Watt, Mountain States’ president, became secretary of the interior, and Rex Lee, who served on Mountain States’ board of litigation, became solicitor general. The decision of Mountain States, under new leadership, to oppose Denver's award of monopoly cable television rights to a company angered a major financial supporter—Joseph Coors—and led to a decline in Mountain States’ finances.

In 1987, the Pacific Legal Foundation achieved noteworthy success by supporting the property owners in Nollan v. California Coastal Commission. The U.S. Supreme Court held, in a 5–4 decision, that the commission could not demand a public easement to provide beach access as a condition for the issuance of a building permit. If California wanted to provide public access, the majority argued, it would need to follow the Fifth Amendment's takings clause. While this case is widely discussed among constitutional law scholars, Decker adds significantly to our understanding of the role that the Pacific Legal Foundation had in supporting the property owners.

This book is essential reading for scholars interested in the impact of legal advocacy organizations on the formation of public policy. The book will also appeal to readers who are interested in the development of the conservative movement in the United States, especially its roots in the Western United States.