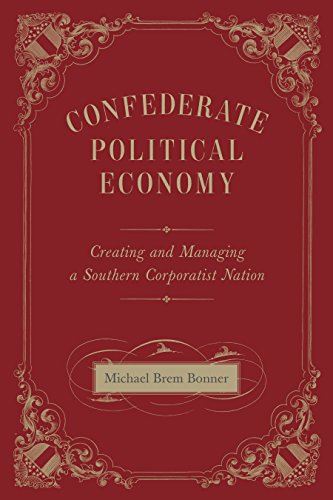 Scholars once tended to dismiss Confederate government as a ramshackle and hamstrung affair, dead at age four of states rights. But closer consideration of Richmond's conscription policy and its impressment of labor and taxes-in-kind has changed that view, with the historian Stephanie McCurry even declaring that “[i]n terms of central state structure and policies, and especially the mobilization of national material and human resources, the C.S.A. was far more statist and modern than their counterpart in the Union” (Confederate Reckoning: Power and Politics in the Civil War South [Cambridge, MA: Harvard University Press, 2010], 153). Michael Brem Bonner agrees that the Confederate States of America (CSA) was distinctly modern, representing, he says, “a brief foray into twentieth-century corporatist organizational state methods, a system of powerful interest blocs partnered with government institutions for mutual benefit” (p. 3).

Confederate Political Economy is not as comprehensive as its title suggests. It leaves out the CSA's harnessing of agriculture—the foundation of its wealth and diplomacy and whose labor system it existed to defend. The book concentrates not on how the Confederacy fed its armies but how it armed them. Bonner examines two private firms—Tredegar Iron Works and Shelby Iron Company—from which the CSA purchased munitions, and two enterprises that it owned and operated—the Augusta Powder Works and Selma Foundry (a private firm that it bought to keep production going). Bookending these case studies are considerations of various aspects of Confederate political culture and governance.

Bonner shows a national government, particularly an executive branch, wielding a power enhanced by a line-item veto, secret sessions of Congress, and the absence of a supreme court and, thus, judicial review. Conscription and a passport system that regulated civilian travel showed the Richmond's government's authoritarian bent, yet that same government is portrayed as more or less at the mercy of railroad companies that it could have taken over but would not. This is the essence of Bonner's Confederate corporatism—a government ready to infringe citizens’ liberties while allowing private companies considerable freedom to shape industrial policy and profit off wartime necessity. It emerged not as a conscious exercise in state building but instead an ad hoc or “expedient” response to the exigencies of waging war.

Bonner's is not a corporatism that every student of the phenomenon will recognize. Individual companies bargain with government officials, gaining subsidies, advances, and, usually, he says, the upper hand in the partnership. When Bonner finally gets around, in the conclusion, to comparative analysis, it becomes clear how far short this bargaining falls of the corporatism that developed in twentieth-century Italy or Germany or, albeit briefly, the New Deal's National Recovery Administration. As Bonner concedes, labor (whether its interests were authentically represented or not) was typically part of a corporatist triad, along with business and government, but labor had no presence in Confederate arrangements. This should not surprise us. The bulk of the southern working class was enslaved, although the industries Bonner focuses on—iron, railroads—did employ free labor, too. But we see few of the other formal structures of corporatism either—interests institutionalized not only in unions but cartels and trade associations. Readers encounter the CSA's Ordnance and Nitre and Mining Bureaus and conventions of railroad managers setting uniform rates. But where are the “powerful interest blocs” invoked at the book's beginning? It is sober second thought, perhaps, that demotes the CSA from the “corporatist nation” advertised in the subtitle to possessing “several characteristics that paralleled those of twentieth-century corporate states” by book's end (p. 189).