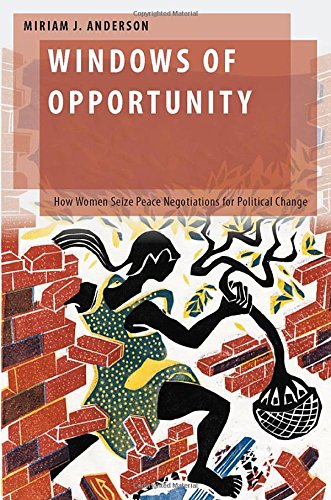 From 1975 to 2011, more than 200 peace agreements concluding conflicts mentioned women in some fashion in approximately 40 percent of cases (p. 1; however, on p. 9, the figure is 32 percent). Drawing on the Burundi agreement (Arusha Peace and Reconciliation Agreement, 2000), the Northern Ireland settlement (Good Friday Agreement, 10 April 1998), and the Macedonian treaty (Ohrid Framework, 2 August 2001), Miriam J. Anderson explores the conditions that lead to the inclusion of women at the peace table—or not. Her analysis embeds these cases in a study of the existing literature on peace building, mediation, negotiation, women and war, human rights, and norm diffusion thinking.

By and large, women inserted themselves into the agreements ending the Burundi and Northern Ireland cases because of several conditions. For one, these were long conflicts during which women inserted themselves into civil society to take on roles usually closed to them. Then, women reached across their group identities to emphasize their gender unity over ethnic ties. In addition, women—especially in North Ireland—had a tradition of political activism, and in both successful cases, women called on international women's groups, including UNIFEM (United Nations Development Fund for Women), for reiteration of their demand to be included in peace negotiations and to inclu