The Chessboard and the Web: Strategies of Connection in a Networked World, Anne-Marie Slaughter 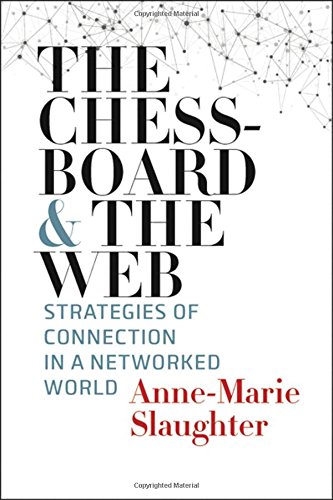 Policymakers often see the world as a chessboard: a game of strategic power plays between self-interested states in competition. What would happen if, instead, they saw a world of social connections between people and groups within and across borders? Anne-Marie Slaughter argues that it would change the world. Her remarkable new book starts from the premise that state sovereignty no longer rules. States now coexist and compete for influence alongside many other actors—companies, nongovernmental organizations, intellectuals, criminals—woven into networks that often transcend borders. These networks shape the world in ways that are not yet fully understood. This new reality requires a fundamental shift in thinking. Slaughter eloquently lays out a template for that shift.

The central claim is that networks can be more effective solutions to humanity's global problems than existing hierarchical, state-driven efforts. (Think the United Nations or the World Bank.) Translating that claim into reality requires recognizing that we live in a world in which both state power and networks of people coexist. And it requires leveraging different types of networks to fit the kinds of problems they can most readily influence—specific problems require specific network solutions.

Consider disaster relief. Slaughter lays out a tool kit for how to c