Nixon's Back Channel to Moscow: Confidential Diplomacy and Détente, Richard A. Moss 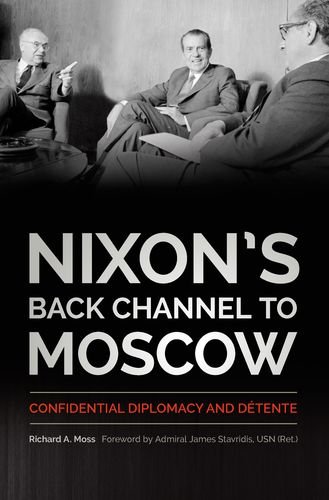 Richard A. Moss's book on President Richard Nixon's back-channel diplomacy successfully addresses this perennial issue. Although Nixon's foreign policy has been studied at great length, his back-channel diplomacy is largely untouched in previous literature. Moss conducts comprehensive research on declassified document collections in the Nixon administration, including the Nixon tapes and Henry Kissinger's telephone conversations. With a focus on the confidential meetings between National Security Adviser Kissinger and Soviet ambassador Anatoly F. Dobrynin, his work demonstrates that Nixon's back-channel diplomacy worked effectively for reducing tensions between the two superpowers.

In the book, Moss traces the evolution of back channels along with major Cold War events during Nixon's presidency. The r