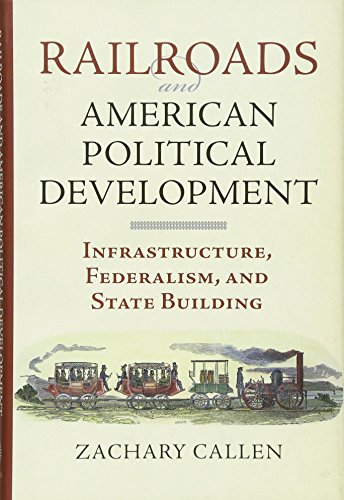 In the American system of government, the relationship between the states and the national government has always been complex. Zachary Callen, in Railroads and American Political Development, demonstrates the enduring truth that federalism is an inescapable aspect of our political system by showing how it shaped the early development of our nation's infrastructure.

Callen's work opens with a straightforward presentation of infrastructure policy in the early republic. Until passage of the Land Grant Act of 1850, which provided federal land to the states for railroad construction, there was nothing resembling a centralized infrastructure program in the United States. Prior to that time, there were sporadic state-level efforts with minimal coordination and only occasional national efforts. Callen argues that federalism fundamentally structures these kinds of policy issues, as failures of state-led policy eventually encourage pressure for national action. As states found themselves unable to complete railroads on their own, political leaders turned to Congress. Importantly, Callen links this particular issue to the broader debate over how American governance developed and shows how federalism can in fact lead to the growth of the national government, and not just present obstacles that inhibit national action.

Chapters 2 and 3 of the boo