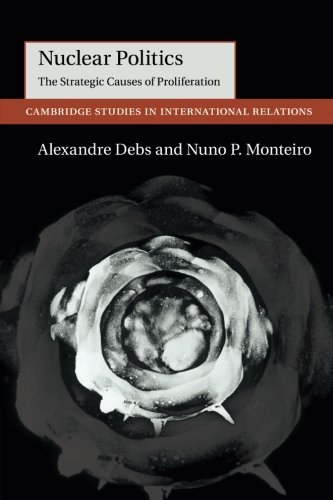 One of the central puzzles of nuclear politics is that only 10 countries have built nuclear weapons, despite the fact that many others have the technological capacity to do so. What accounts for the surprisingly slow pace of nuclear proliferation since 1945? Alexandre Debs and Nuno P. Monteiro provide a novel explanation in their new book, which is essential reading for anyone interested in international security, peace, and conflict.

Debs and Monteiro develop a theory of nuclear proliferation that focuses on a country's strategic environment. To understand the proliferation process, they argue, we must consider the security threats that a country faces, the possibility that adversaries might launch preventive military attacks, and the presence of military alliances. Their theory generates two pathways to nuclear weapons acquisition: (1) serious security threats combined with conventional superiority vis-à-vis the proliferator's adversaries or (2) security threats paired with an alliance that the protégé sees as unreliable.

Previous work highlights the role of insecurity as a driver of proliferation, but most recent scholarship focuses on domestic politics, leader psychology, economic liberalization, foreign nuclear assistance, and international norms. Scholars turned away from security-based theories after the Cold War ended, partly because they seemed inadequate for explaining trends in nuclear politics—particularly that many states remained nonnuclear despite facing major threats. Debs and Monteiro show, however, that a more complete security-based argument can account for historical trends.

Their theory is insightful in many respects, but it may be too sanguine about the conditions under which threats to launch preventive wars are credible. According to the theory, the possibility of preventive war deters nuclear weapons acquisition when the conventional balance of power favors the proliferator (or when the proliferator has an alliance). Yet there may be cases in which such a threat is noncredible even if the proliferator is relatively weak. If, for example, the potential attacker does not believe that it could locate and destroy all sensitive nuclear sites, it may not be productive to attack, especially since preventive war could raise the target's demand for nuclear weapons. The authors argue that “the overall prospects of stealthy nuclearization . . . are exceedingly slim” (p. 445). In my view, however, locating and effectively targeting nuclear technology is more difficult than it may appear. Consider the 1991 Persian Gulf War: numerous Iraqi nuclear plants remained intact, including a centrifuge site at Rashidiya, even though crippling Iraq's nuclear infrastructure was one goal of U.S. airstrikes during the war.

The authors test their theory by analyzing general historical trends across 26 cases (Chapter 3) and carrying out 16 detailed case studies (Chapters 4–6). The scope and depth of their historical analysis is impressive. The case studies will serve as an indispensable reference for scholars seeking to understand nuclear history in a diverse set of countries.

The authors understandably focus on cases in which countries explored or pursued nuclear weapons. However, their logic may come into play before countries even flirt with the possibility of a nuclear arsenal. It seems plausible that the possibility of preventive war, if credible, could deter states from even exploring the nuclear option. To their credit, the authors acknowledge this possibility (pp. 62–64, 480–497). Future research might extend their analysis to assess the extent to which the theory explains nuclear weapons exploration or pursuit, not just acquisition.

Nuclear Politics is one of the most significant books written on the causes of nuclear weapons proliferation. It should be widely read and discussed around the globe.