Race and the Politics of Deception: The Making of an American City, Christopher Mele 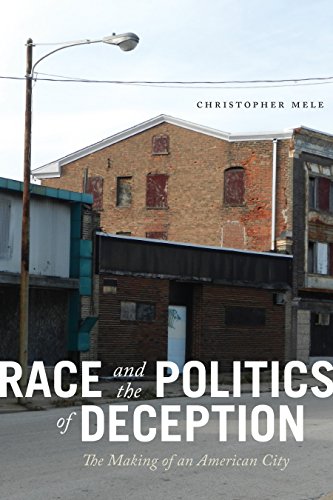 The promises of urban economic development ring loud today: across the country, cities assure residents that new stadiums, new casinos, and new intracity transit systems will change the landscape of the city and lead to revitalization of downtown neighborhoods and depressed economies. Yet, as Christopher Mele concludes in Race and the Politics of Deception, these benefits are most often realized only for the privileged few, leaving poor residents and residents of color behind.

Mele argues that this outcome is not inevitable, but rather intentional, and built upon a race strategy that emphasizes color blindness. Urban leaders profess to make decisions based on factors other than racial divides in a city while simultaneously employing coded language and rhetoric that capitalizes on racist attitudes. As a result, racial segregation and disenfranchisement in cities is blamed on the poor choices and behaviors of residents of color, rather than the racial structures underlying the institutions.

The book is an homage to Chester, Pennsylvania, a city close to Mele's hometown. He painstakingly chronicles the rise and fall of the industrial city from 1900 to the present day. In in-depth interviews with current and former residents and leaders, as well as archival research, he reconstructs a number of points throughout Chester's history in which urban political machines made decisions that benefited white residents at the expense of black residents.

The strength of the book comes from the historical detail Mele is able to recount. To be sure, the stories of racial segregation, inner-city poverty, city disinvestment, and stratified urban renewal are not new, and Mele makes some mention of how Chester followed in the footsteps of other postindustrial cities. Yet Mele is able to tell these stories in finer detail, including many of the key players who both fought for more racial integration and those who used their power to ensure that white residents in Chester remained the main beneficiaries of political decisions. Students will find the vignettes about power struggles engaging.

What the book offers in detail, however, it lacks in theoretical orientation or innovation. As noted earlier, the story of Chester has been told before, and while Mele can tell the stories in perhaps sharper detail, he has little to offer as to how these processes fit within the larger theoretical arguments about why racial strategies are so effective in urban politics. What are the causal relationships being tested? What are the factors that influence when and where the racial strategy will be employed?

Moreover, in the study of Chester, Mele does little to refer to the larger decisions happening nationally that were influencing all cities during this time period, creating the urban underclasses and newly segregated cities. Although others have written extensively on these phenomena, missing from the book is how the case of Chester either builds upon these theories or provides other insights.

For urban political scientists, the last chapter on the politics of the casino development and the reliance on color-blind policies is perhaps the most provocative. Indeed, it is in Mele's argument about how postracial cities are created that the reader will find the most well-developed theoretical argument and hypotheses about how we might see the promise of color-blind policies lead to racially divided cities.

Despite these reservations, this book makes an important contribution to our understanding of racial inequality in cities and is a welcome addition to the urban politics literature.